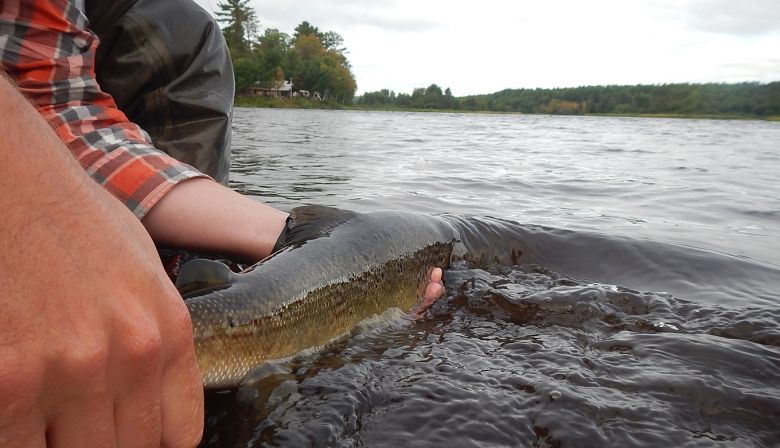 The Miramichi has heritage importance, including, among other things, the wild Atlantic salmon runs, its First Nations history, and its historic Oct. 1825 fire that was the third largest known in North American history.
A Miramichi federal election candidate says the Miramichi River should be recognized as a heritage river, an idea his opponent says is worth exploring.

Jake Stewart, the Conservative Party candidate for Miramichi-Grand Lake, pledged to start the process of designating the river under the Canadian Heritage Rivers System so the region can reap the benefits from it.

"While the designation itself is largely ceremonial, the initiative can bring a renewal of environmental stewardship toward the river ecosystem and can also spur economic benefits by way of tourism and investment," Stewart said Thursday in a news release.

"The fact that this program has existed for decades but has never been initiated in Miramichi is concerning to me. This is a no-brainer."

The heritage river system is a co-operative program led by the federal and provincial governments to protect Canada's best examples of river heritage. It was started in 1984, with the first designation issued in 1986.

New Brunswick's three heritage rivers are the St. Croix River, St. John River and Upper Restigouche River. There are 40 rivers with this tag across Canada.

Stewart said the Miramichi watershed has a rich history, with Mi'gmaq people living along it for thousands of years. He said Jacques Cartier sailed into Miramichi Bay's waters in 1534, and timber from the region helped drive the British Empire's economy.

Stewart said Middle Island also served as an entry point to Canada for thousands of individuals and families, particularly from Ireland, throughout the 1800s. He pledged to "quickly" work with the feds and province to have the Miramichi River, its headwaters, tributaries and estuary honoured under the heritage river system, if he is elected in the next federal election.

"The downturn in the forest and fishing industries over many decades has had a destructive impact on the Miramichi region, through which our river runs," said Stewart, the Tory MLA for Southwest Miramichi-Bay du Vin.

"But we draw strength from our history and from our forefathers, who in turn drew strength from the river itself. This initiative is fitting and a long overdue recognition in my opinion."

Lisa Harris, the riding's Liberal candidate, said a heritage river designation would be worth exploring. She said she would like more information on the idea, but if her constituents support it, she may pursue it if elected.

"It would be worthwhile to at least look at it," she said. "I'll need to look into what the benefits are, and if it's what

the people of Miramichi-Grand Lake want, that's what we'll fight for."

Natural Resources Minister Mike Holland said Saturday he's willing to work on the idea. He touted his provincial department's work with Stewart in recent years on "enhancing and building protections and opportunities for all to enjoy the Miramichi River."

"There are a number of dynamics involved in a program of that nature, all of which have details I would look forward to discussing and working through sometime," he said.

According to the program's website, nominated rivers must have "a high level of public support" and include natural and/or cultural significance, along with recreational uses.

Steps include contacting provincial or territorial heritage river board members or technical planning committee members to discuss whether a river is a viable candidate and its jurisdiction supports moving it through the process.

A pre-screening report may be required, the website states, along with a background study and nomination document.

The nomination must then be approved by the provincial or territorial minister and federal Environment and Climate Change minister. A non-binding designation document will be produced and submitted to the heritage river system for approval and formal designation.

After a river is designated, reports are prepared annually describing changes, improvements and threats to the values for which the river was recognized. An in-depth review is conducted every 10 years.