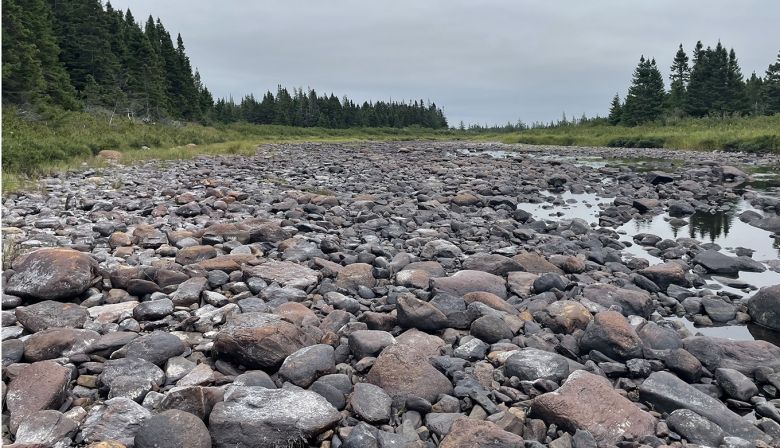 The Southwest Terra Nova River showing the desperately low water levels. Photo John Baird
When Craig Purchase visited his normal fishing spot upstream of Terra Nova Lake this past Labour Day weekend, it was clear why angling was off the table.

"Where it would normally be waist deep, there was two to three inches of water," Purchase, who's also a professor of biology at Memorial University, said.

Bare rocks and trickling brooks have been a common sight through a swath of central Newfoundland this summer, Purchase said.

"The stretch from Springdale to Clarenville, it's been kind of desperate for a whole long time," Purchase said. "Basically those rivers, since the snow melted, they never got any reprieve at all."

Rainfall has boosted most rivers in the last two weeks, Purchase told CBC Radio's The St. John's Morning Show Monday, with the exception of Terra Nova River. That area has continued to have "bad luck," he said, missing out on rain events elsewhere.

Volunteers who monitor water gauges on the Terra Nova River confirm it's been a dry and dire situation for the salmon spawning river.

"We are 70 per cent below the average waterflow in the river for the months of June to August for this year," said John Baird, the head of the Freshwater-Alexander Bays Ecosystem Corporation.

Low water levels were a worry for anglers even prior to this year's salmon fishing season. According to Department of Fisheries and Oceans data, salmon returns to the lower Terra Nova River are about half what they were the year prior: just shy of 2,300 fish by Sept. 12, compared to 4,774 by the same date in 2020.

A warm summer and little rain can have "lots of potential implications" on aquatic life, said Purchase.

"We have reports across central Newfoundland of acute impacts on salmon. So literally, salmon dying in the river and floating downstream," he said. 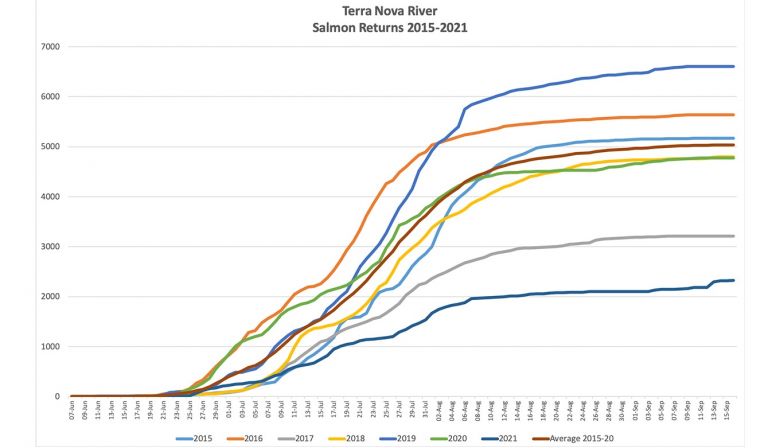 Their food sources are also stressed, as dry stream beds provide little habitat for aquatic insects. Some of those bugs have multi-year life cycles, Purchase said, meaning there could be scarce nutrition years down the line.

While river levels besides Terra Nova seem to be bouncing back a bit, "there's still time" for spawning, he said — most salmon spawn starting in the end of October — but salmon may not be able to move as far as they would like in the watershed.

"They might be more concentrated in where they're spawning, and this isn't good for them, the growth of the offspring in future years," Purchase said.

In the big picture, this summer "is a concern," said Purchase, and it's not limited to 2021. "There's somewhat of a trend," he said.

Baird's data points that way too.

"It seems to be a bit of a trend. Four of the last 10 years have been low water levels, but this year really takes the cake," Baird said.

Baird worries what role climate change may be playing in the watersheds — and wants to have more people involved in preparing for this to potentially become the norm.

"We need to look at land use practices, forestry practices, areas that need to be protected, cold water pools and tributaries and streams that are important fish habitat, where fish take refuge," he said.

"We need to make sure they're as resilient as possible. So we need to really look at our rivers much more closely in terms of how to respond to climate change impacts."