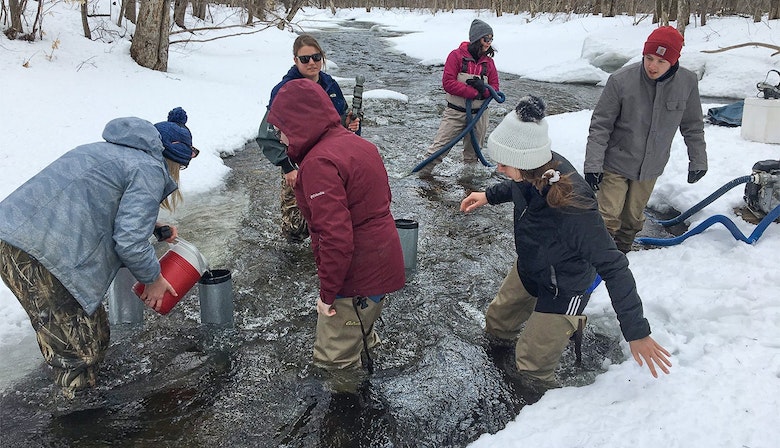 University of Maine Farmington students deposit Atlantic salmon eggs in the gravel of Temple Stream. The eggs will hatch into alevin, then eventually emerge from the gravel as salmon fry. Photo Amber Kapiloff
FARMINGTON - As of Wednesday morning, 10,000 Atlantic salmon will have a chance at life thanks to the work of eight students at the University of Maine at Farmington.

The students, who make up an honors marine biology class, worked in collaboration with the Maine Department of Marine Resources and the Atlantic Salmon Federation to plant the eggs Temple Stream- an area that has been recognized as ideal salmon spawning habitat by MDMR. Using a large hydraulic injector, the students dug down into the stream's gravel and dropped the blaze orange eggs into the stream. The fertilized eggs, which are specifically used when shells have grown tough enough to handle, are protected by the gravel overlay. Eggs will hatch into tiny alevin later this spring and take the next two years to develop in the calm, clean waters of Temple Stream before heading toward the Atlantic Ocean.

Over the course of the next two weeks, thousands of salmon eggs will be planted in streams all over Maine, with the hopes of boosting the alarmingly low number of Atlantic salmon still in existence. In addition to focusing on restoring numbers, MDMR is working with local municipalities to remove or renovate dams that block the salmon's path for reproduction. Salmon are anadromous, meaning live in both fresh and salt waters. While it takes two years for salmon to grow strong enough to head to sea, they will spend at least that long maturing in the salt waters off the coast of Greenland and Iceland. The adult fish then return to their hatching grounds- sniffing their way home- to continue the cycle. Many dams in Maine and New England have adapted to include a fish ladder for the salmon to bypass the barrier, or have removed the dam altogether.

Farmington is currently in the process of preparing to remove the Walton's Mill Dam, which Temple Stream runs through on its way to the Sandy River. Project coordinators will apply for necessary permitting this fall and expect to begin work on removal in July of 2021.

Many of the planted salmon are being tracked by marine biologists to measure success rates. A fish named Charlie was recently discovered returning for a second cycle of spawning and was transported around several dams in central Maine to return to his ultimate destination of the Sandy River.

"It was cool how little time it took for us to do something so impactful," UMF student Magnus Sibley said.

Sibley and his class will continue to learn about the salmon next week when visiting MDMR marine biologist Jennifer Noll will explain how to decipher a salmon scale. Like a fingerprint, scales are unique to each fish and can provide information such as how many years old the fish is, how many times it has spawned and how many years it spent in fresh water or salt water.

"I really think if more people knew about it, more people would be ready to help," Lindsey Boylen said.