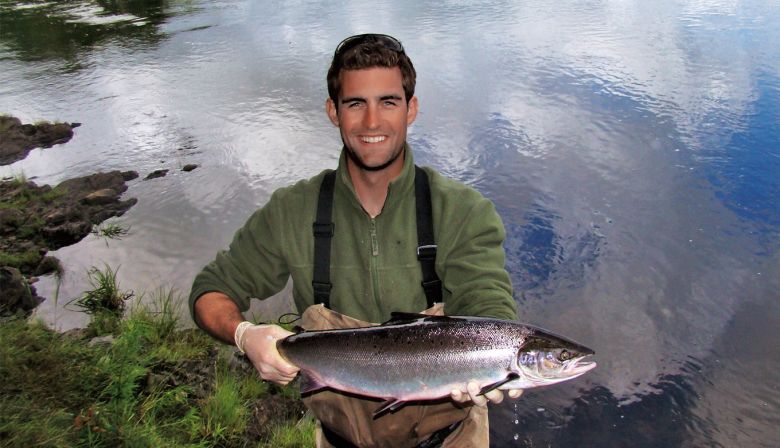 Salmon populations have dropped considerably over the last 30 years, due in part to the legacy of acid rain and poor land-use practices across the province. It has been more than a decade since the last major survey of Atlantic Salmon in Nova Scotia, which found that the number of juvenile salmon had declined significantly.

With support from Oceans North, the Nova Scotia Salmon Association undertook environmental DNA (eDNA) and water quality surveys this past spring to update the science on Atlantic Salmon in Nova Scotia. “In order to protect and restore Atlantic Salmon, we first need to know where they persist and how that is influenced by the quality of their habitat,” explains Eddie Halfyard, a research scientist with the Nova Scotia Salmon Association.

Environmental DNA is an emerging tool in conservation that can identify DNA shed into the water by aquatic organisms. Scientists use it for a number of purposes, including to identify the presence of individual species in places such as lakes and rivers. The researchers aimed to test whether Atlantic Salmon could be found in 30 rivers ranging from Dartmouth to Guysborough, and to see whether that presence was correlated to water quality.

Through their surveys, the researchers found that Atlantic Salmon distribution along Nova Scotia’s eastern shore has not changed significantly and is strongly influenced by river pH (a measure of acidity). Despite declines in the salmon population, many rivers still support salmon, and those that do not have been significantly impacted by acidification.

“The results show that it is not too late. Targeted efforts at restoring and improving habitat will allow Atlantic Salmon to recover,” says Halfyard. Lessons learned from this study will help contribute towards recovery plans for the Atlantic Salmon, which could ultimately improve the quality of freshwater habitat throughout the province.