Feb 13, 2020
Salmon advocates unveiled their latest ammunition Wednesday in the battle over a proposed Guysborough County gold mine.

The three-minute and four-second video asks viewers to join them in opposition to Atlantic Gold’s proposed open pit gold mine at Cochrane Hill, along Highway 7 near Sherbrooke.

Included in it is underwater footage from McKeen Brook of a female Atlantic salmon digging a nest in the fine gravel with her tail and a male salmon swimming in and out of the picture.

The proposed mine, with its two-kilometre-long tailings pond kept in place by a 21-metre-high berm, would be located above McKeen Brook, which flows into St. Marys River less than a kilometre away.

It’s not news that Atlantic salmon spawn in McKeen Brook — Fisheries and Oceans Canada annually counts the nests made by egg-laying females.

“… Everything that comes out of this mine will flow downhill, right into this critical salmon habitat and wood turtle habitat.” 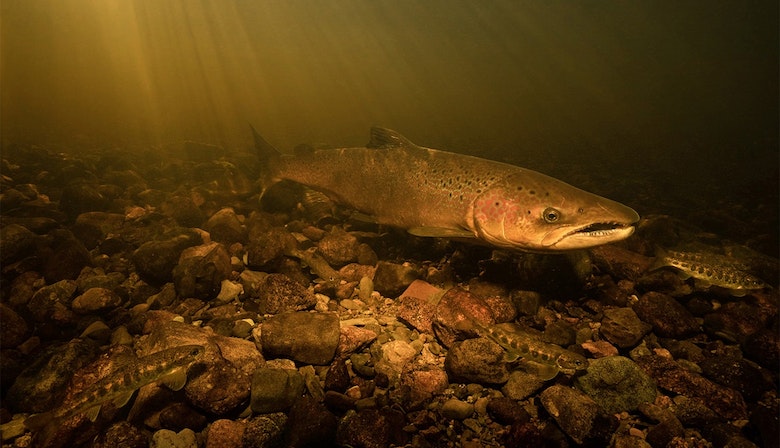 Large salmon in the St. Mary's River, photographed Nov. 2019. ASF/Nick Hawkins and Tom Cheney
For its part, Atlantic Gold had a ready response.

“It is important to point out that federal Fisheries and Oceans dictates that water leaving any mine site is clean, strictly monitored, tested and regulated,” reads a written statement from the company’s spokesman Dustin O’Leary.

“Atlantic Gold’s current mine in Moose River has operated next to Scraggy Lake and the Ship Harbour/Long Lake Wilderness Protected Area for more than two years. All testing indicates that water and aquatic life in these areas have not been negatively impacted by our operations.”

The project description filed by Atlantic Gold in 2018 as part its federal environmental assessment states that it “may” require a ministerial exemption under section 35 of the Fisheries Act, which prohibits the “harmful alteration, disruption or destruction of fish habitat.”

Atlantic Gold, bought last spring by Australian company St. Barbara Mining Ltd. for $536 million, has suffered a number of setbacks over the past year. The federal regulator sent it back to the drawing board demanding more information than was contained in the impact statements it filed for its proposed Fifteen Mile Stream and Beaver Dam open pit mines.

According to the quarterly report issued to shareholders by St. Barbara on Jan. 22, the company is waiting on the completion of those impact statements before it moves forward with its environmental assessment for Cochrane Hill.

Then the provincial government announced public consultations on the proposed Archibald Lake Wilderness Area, which would cover two lakes from which Atlantic Gold proposed to take water for its mining operations. 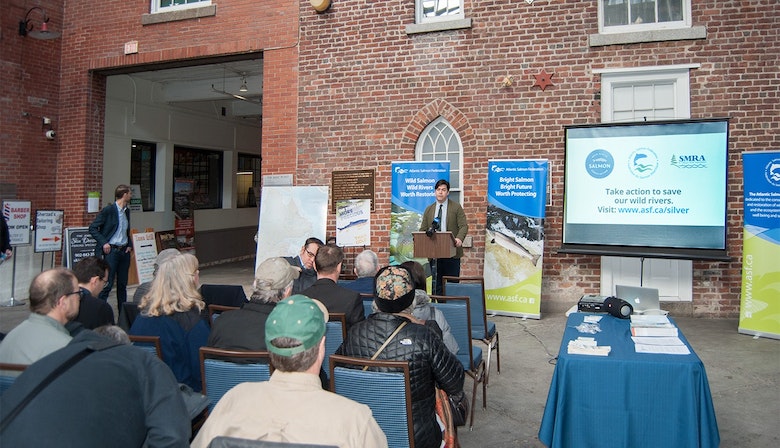 Neville Crabbe of ASF was one of the speakers at the press conference held in Halifax on the presence of spawning large salmon in McKeen Brook. ASF/Kris Hunter
“The company is reviewing the government proposal and potential alternatives to assess whether there is any impact on the Cochrane Hill Gold Project, and will engage with the government within the consultation period,” says a note to investors on St. Barbara's most recent quarterly report.

While the company works on jumping regulatory hurdles, it is making money.

Its Moose River operation is its most profitable with an all-in cost of gold production of $823 per ounce compared with $1,603 per ounce at its mine in Papua New Guinea and $1,559 at its Australian operation.

Meanwhile, Nova Scotia charges less than half the tax of the other jurisdictions where the company operates.

According to results of its drilling program released last week there are 398,000 ounces of indicated gold in Cochrane Hill with a further 69,000 ounces of inferred gold present.

Nova Scotia will get more exploration investment from the company in 2020 than any of the other jurisdictions in which it operates. 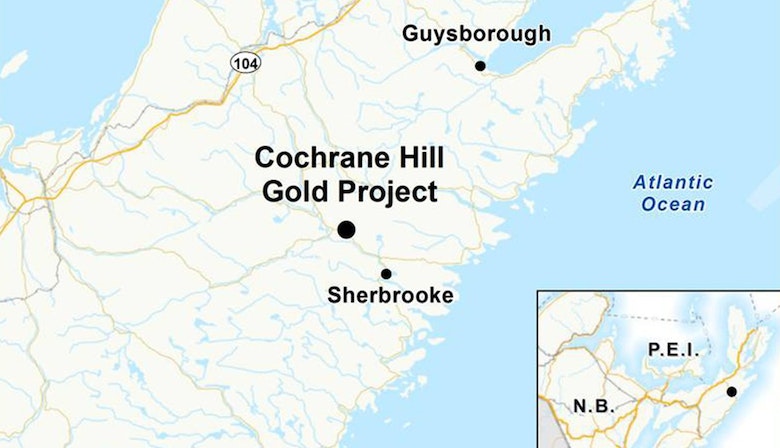 Location of Cochrane Hill proposed gold mine near the St. Mary's River.
Leading the campaign against the company is the St. Marys River Association, which for decades has been doing restoration work on the river in an attempt to reverse the decline of its salmon population.

Over recent years it's had considerable success. Without a counting fence on the river it relies largely on volunteers who count sites where female salmon have laid eggs.

“Every year the number has been going up,” said association president Scott Beaver.

“… My question to Atlantic Gold and St. Barbara is we've been fighting for a year and a half now, at what point do you admit you do not have a social licence in this community and withdraw like a good corporate citizen?”

For its part, Atlantic Gold responded with the following written statement:

“Atlantic Gold appreciates the efforts of the Atlantic Salmon Federation and its associated partners to build and maintain salmon stocks in Nova Scotia and we share the goal of creating positive conditions for salmon and all aquatic life to thrive. Our company's top priorities are to operate in a safe and environmentally responsible manner that mitigates impacts on the surrounding environment. In the weeks ahead, representatives from Atlantic Gold will review the information and concerns presented by the ASF and will continue our constructive dialogue.”