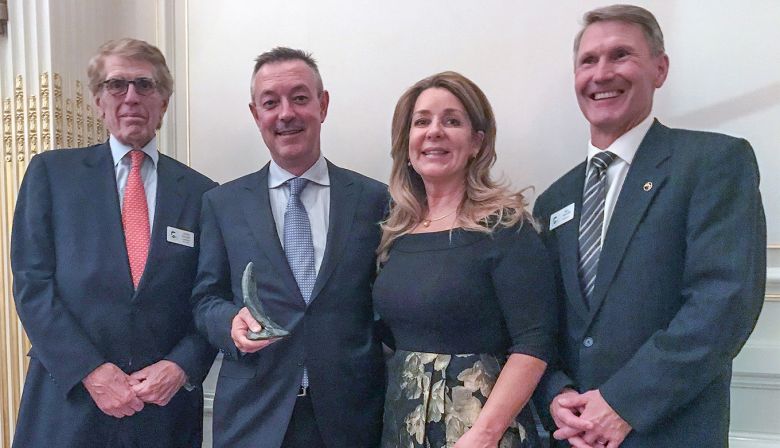 Given annually by the Atlantic Salmon Federation since 1987, the Lee Wulff award recognizes people who have made outstanding contributions at the regional and national level.

Originally from Newfoundland and Labrador, Verbiski rose to prominence following the 1993 discovery of the Voisey’s Bay nickel and copper deposit just south of the community of Nain, Labrador.

Always a passionate angler, Verbiski went on to establish the Atlantic Rivers Outfitting Company, which he currently owns and operates. The company maintains commercial lodges on the Hunt and St. Lewis rivers in Labrador. In addition to educating visitors from around the world about the precious Atlantic salmon rivers in the region, Verbiski dedicates time and resources to scientific research and habitat enhancement to ensure a bright future for Labrador salmon.

In 2014, Atlantic Rivers Outfitting Company, initiated a partnership with the federal Department of Fisheries and Oceans (DFO) to track wild Atlantic salmon over several years in the St. Lewis River. This work has revealed the timing of migration, important overwintering habitat and several partial and complete natural barriers to fish passage.

Based on these results, the company is working with DFO to construct a privately funded fishway on the St. Lewis River which would give Atlantic salmon access to the upper reaches of the fifth largest Atlantic salmon ecosystem in the province of Newfoundland and Labrador. Similar tracking work, in collaboration with DFO, has been initiated at several other sites in southern and northern Labrador.

Verbiski's lodges have had a live release policy for guests since 2012. In the last three seasons ,Verbiski has funded research into the post-release condition of fish, taking into account environmental factors such as water temperature. The study will be used to refine best practices for live release, further reducing the impact of recreational angling for salmon throughout the North Atlantic.

In a region with around 300 known Atlantic salmon rivers and only four DFO-run assessment sites, all in the southern Labrador, Verbiski is preparing to install a state-of-the-art sonar counting system on the Hunt River in 2020. It will be the only salmon assessment site in Canada north of Happy Valley-Goose Bay.

The Lee Wulff Salmon Conservation Award is named in honour of Lee Wulff, the prolific angler, author, and conservationist. In the 1930s, Wulff started releasing some of the salmon he angled, helping kickstart a practice that is used for conservation around the world today. In the 1960s he produced a documentary film on the Greenland salmon fishery, drawing the world’s attention to an industry that was killing hundreds of thousands of fish from North American and Europe every year.