May 12, 2021
Gary Griffin pushed for restoration of tidal flow after watching fish decimated by causeway 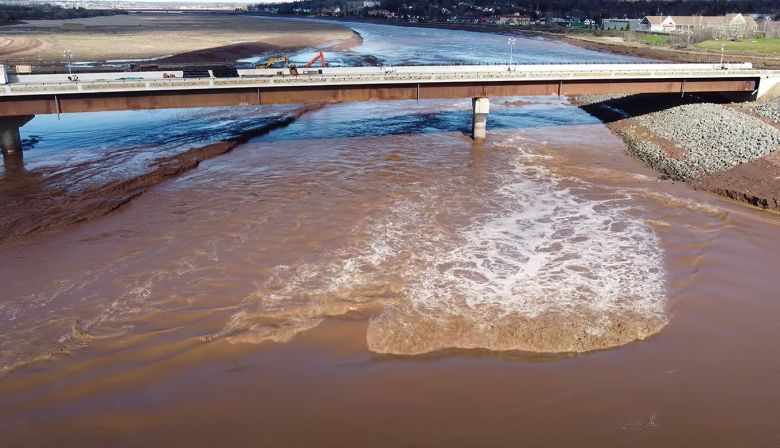 As seen on Apr. 28, with the Petitcodiac River flowing freely under the new bridge span. Photo Christopher Bragdon
For decades, Griffin publicly pushed for restoration of tidal flow on the river. Now he smiles as he looks out at the water from a park in Riverview.

"That was the greatest feeling in the world," Griffin said of watching the water. "You don't know how good that feels after 50 years of trying to fix it."

The sports fisherman came to Moncton in the late 1960s. At the time, a 20-year study of salmon populations completed in 1966 estimated salmon runs at 8,000 to 10,000 fish, the Times & Transcript reported.

But completion of the causeway in 1968 effectively dammed the river once its gates were closed.

Griffin recalls standing on the causeway watching the fall run of the salmon.

"They were being decimated in front of the gate structure," Griffin said.

"The tide went out, it left them there in tidal pools and the seagulls had a free lunch. I stood there with a fisheries officer and said 'This is never going to work'."

Watching those salmon led to Griffin campaigning to restore the tidal flow.

He volunteered with the Moncton Fish and Game Club and later the New Brunswick Wildlife Foundation, operating a trap on the causeway to monitor fish passage. But he said the passage never worked because of the height of the tides.

"I took more dead fish out than alive," Griffin said. "I did that for 20 years trying to get this thing sorted out."

Now, he said they no longer have to worry about that.

After decades of contentious debates, a bridge meant in part to restore fish passage is nearing completion.

In April, the causeway closed to traffic to allow the final steps in the $61.6-million project paid for by the federal and provincial governments.

The causeway gates will close once again on Tuesday at 5 p.m., forcing the river to flow under the bridge. This time they won't reopen.

Mike Pauley, the bridge project manager with New Brunswick's Department of Transportation and Infrastructure, told Information Morning Moncton last month the gates and concrete structure will be buried by rock and form part of the approach to the new bridge. The steel structure overtop of the gates will be removed.

The roadway is expected to open to traffic by Oct. 5, but Pauley said the hope is to get work done sooner than that.

Griffin said since the gates have opened, fish populations are starting to do better upriver.

Tim Robinson is manager of Fort Folly Habitat Recovery, which has been working to monitor and reintroduce inner Bay of Fundy Atlantic salmon in the Petitcodiac watershed since the gates opened in 2010.

The organization collects smolts, salmon that are migrating out to sea for the first time, and sends them to Grand Manan to be raised in sea cages before being reintroduced to the Petitcodiac watershed.

It's an effort to help ensure the fish survive to return and spawn.

The numbers are still relatively small.

An antenna in the watershed that picks up tags in released salmon detected two last year. Two others were confirmed through scanned tags while snorkeling in the water, while others were spotted but not scanned.

Overall, Robinson said the organization is encouraged by the progress so far and he expects the new bridge will help.