We Believe in this Project

Aug 24, 2021
The proponents of a smallmouth bass eradication project in the Miramichi River system hope to work with Indigenous groups opposing the project to find a way to proceed. 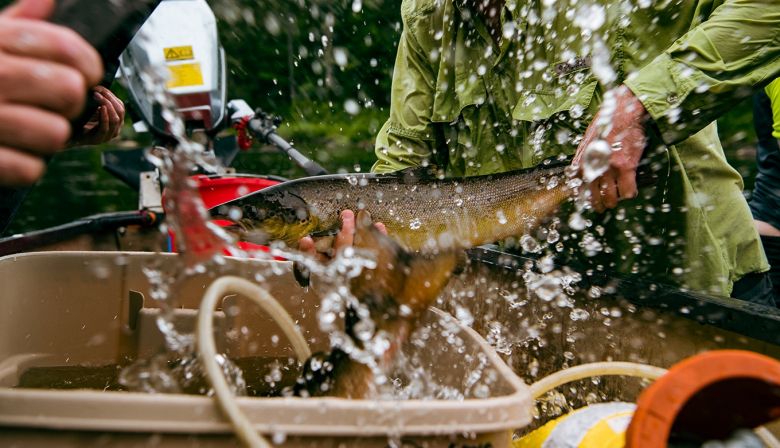 Nathan Wilbur of ASF moves an adult Atlantic salmon out of the area that would be subject to the rotenone application. Tom Cheney/ASF
Members of the Working Group on Smallmouth Bass Eradication in the Miramichi say time is of the essence for their plan to treat Miramichi Lake, Lake Brook, and a portion of the Southwest Miramichi River with rotenone in an effort to remove the invasive species.

with Wolastoqiyik communities, but working group representatives Nathan Wilbur and Robyn Mccallum say they still hope to treat the lake, brook, and river sometime this year with a piscicide.

"It's really important for New Brunswickers, whether you're from a First Nation or any community," said Mccallum, the president of the Miramichi Salmon Association.

"The Miramichi is one of the greatest salmon rivers in the world. We believe in this project, and we need to move faster than the invasive smallmouth bass if we want to save this river."

Several years in the making

The smallmouth bass are believed to have been introduced illegally to the lake around 2008 in effort to create a recreational fishery. They were contained by a barrier before some escaped in 2019 via Lake Brook and ended up in the river.

Conservationists have long been calling for action to wipe out the species, which

- unlike striped bass - isn't native to the Miramichi and is considered a threat to the river's wild Atlantic salmon populations.

The working group's plan was to treat the remote, 220-hectare lake, five-kilometre brook, and 13.6 kilometres of the river simultaneously starting Aug. 17. The river and brook would be treated a second time in mid-September with a chemical containing rotenone.

Several weeks of field work also took place this summer, with a fish barrier being installed across the Southwest Miramichi, an adult salmon rescue being carried out, supplies and materials being delivered by a helicopter, consultants being engaged, and 120 people being trained.

Project delayed 'out of respect'

Wilbur acknowledged the Indigenous consultations didn't reach everyone in First Nations communities, and the Wolastoqiyik mothers and grandmothers occupying the lake "felt they did not have enough information about the project."

"Out of respect for those who didn't have enough information, we hit pause and will sit down with the mothers and grandmothers to provide information

and answer questions like we did throughout the rest of the consultation process," said Wilbur, the regional program director for the Atlantic Salmon Federation.

Mccallum said the working group and Indigenous people are likely all fighting to protect the Miramichi's native ecosystem. She said various mitigation measures were put in place behind the scenes, including oxidizing the stream bed.

"Maybe this is just a miscommunication, and we can sit down and outline all the ideas that have come through lately," she said.

"We have considered every avenue to avoid getting to this point."

The Mi'gmaq Chiefs of New Brunswick issued a statement Aug. 20 supporting the project while acknowledging talks remain ongoing between them and Wolastoqiyik leaders to determine the best course of action.

But Brandy Stanovich, a member of Wotstak (Woodstock) First Nation, hiked into the lake Aug. 17 in support of the mothers and grandmothers already there. She said she's concerned the working group won't be able to adequately consult Wolastoqiyik and Mi'kmaq community members in a short time span.

Stanovich also said the working group should consider alternatives to chemical treatments, such as hiring people to fish or introducing species such as perch that predate on smallmouths.

"It doesn't seem fair in my eyes," said Stanovich. "I feel like there are other ways that haven't been explored.