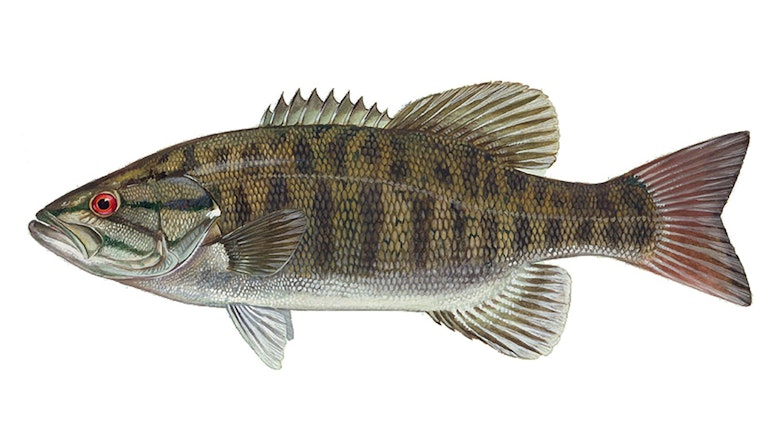 Smallmouth Bass
For the first time, the province of Nova Scotia is proposing to poison a lake to kill off an invasive species.

It's a last resort to stop the spread of smallmouth bass from a headwater lake that flows into the St. Marys River system, which is home to trout and a surviving Atlantic salmon population.

"We want to eradicate them from this lake to ensure the integrity of the St. Marys River watershed is left intact," says Jason LeBlanc, manager of resource management at Nova Scotia Fisheries and Aquaculture.

Since the illegally introduced bass were first detected in July 2019, biologists have removed hundreds from Piper Lake in Pictou County, a five-hectare lake located halfway between Stellarton and Sheet Harbour.

The fish were netted, angled, stunned with current from an electrofishing boat, even starved of oxygen when a pump lowered water levels last fall ahead of the winter freeze.

"We were close, yet still they managed to survive the winter and in fact, this spring successfully spawned again. We knew that we were going to have to do something a little bit more drastic," says LeBlanc.

Drastic now means pumping around 35 litres of the pesticide rotenone into the shallow lake — its deepest point is three metres.

The pesticide — LeBlanc refers to it as a toxicant — is taken up through the gills and targets fish.

"So for the most part, other organisms are unaffected. The concentrations of rotenone we will be using in this lake are very, very small. It's a product that's approved through Health Canada, used in several other jurisdictions specifically for this purpose. And rotenone actually breaks down very, very quickly. It starts to break down within hours and within a few days would be undetectable," he says.

The department will temporarily block the outflow so rotenone will be confined to Piper Lake.

A beaver dam that had blocked the outflow was quickly replaced last year with a berm and screened culvert.

Environmental DNA tests that can detect traces of DNA left behind by a species were taken downstream. No presence of smallmouth bass were found, offering hope they have not spread from Piper Lake.

It's believed the bass were illegally dumped in the lake in 2018.

"We feel lucky that we were able to detect the population early enough that we do have a really legitimate good chance of success," says LeBlanc.

Application before provincial and federal regulators

The application is in the middle of a 30-day public comment period.

If approved, rotenone would be pumped into the lake in mid-October. Kris Hunter, ASF's Director of Programs for Nova Scotia and Prince Edward Island. Steve Lawrence/CBC
Several groups have written letters of support, including the Ecology Action Centre in Halifax. The environmental group normally opposes pesticides but says in this case its use is "appropriate and necessary" to protect native trout and salmon.

"We recognize the clear and immediate threat to the entire St. Marys River system if this invasive species spills out of Piper Lake," said EAC senior wilderness co-ordinator Ray Plourde, in a letter to Keith Colwell, the minister of fisheries and aquaculture.

Scott Beaver of the St. Mary's River Association praises the province for its quick response once bass were detected.

Millions of dollars have been spent on habitat restoration and conservation efforts to maintain Atlantic salmon in the St. Marys River.

Kris Hunter of the Atlantic Salmon Federation is also on board.

"It seems like an oxymoron to say that to help fish, you're going to kill fish," says Hunter.

"It's not something you entertain lightly or easily. There's a lot of healthy debate and science that goes into making that decision. We view this as sort of a preventative conservation effort that you're not just doing what's good for now, but you're doing what's going to be good for the long-term health and future of the system."

The federation is supporting the use of rotenone in New Brunswick on a 15–kilometre section of the Miramichi River and to Miramichi Lake. The project is on hold after the province's environment minister decided it must first undergo an environmental impact assessment.

LeBlanc says after the application is used, he expects native fish species will naturally repopulate the lake over time. Annual monitoring will be conducted to assess recolonization of native species and restocking will occur if required.