Why poisoning this river is seen as good news 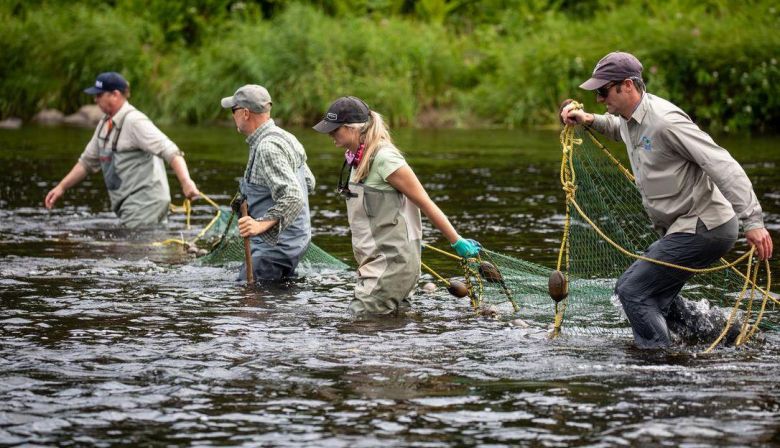 Herding fish to a fyke net so that they can be removed.
NAPADOGAN, N.B.— In 2008, a fisherman at New Brunswick’s Miramichi Lake hooked a fish that wasn’t supposed to be there.

That catch set off a chain of events that ultimately led to this: More than a dozen biologists and conservationists tramping through the water across the Miramichi River on a muggy day last week, herding the water’s native salmon into a net.

The humans were there to stage an aquatic rescue mission ahead of a bold intervention that’s meant to set nature’s course right again.

One by one, they retrieved the salmon from their net — along with any other native river species — and transported them to a big, blue tank sitting in a pickup truck. When the tank was full, they drove — an hour over rattling, rutted logging roads — to a point well downstream, where, one by one, they released the fish carefully back into the river. 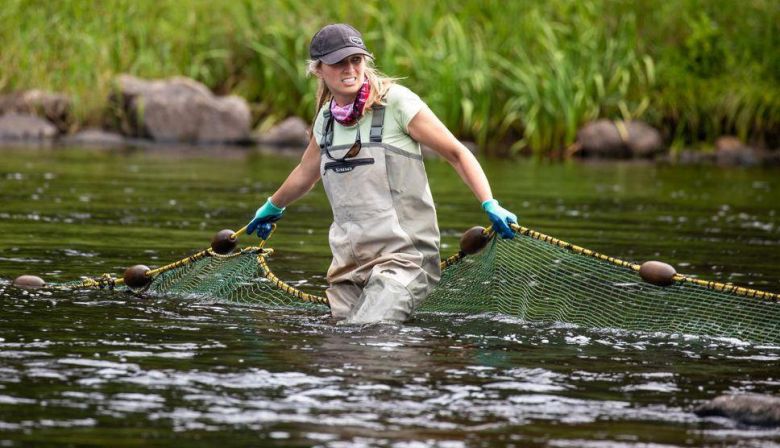 Robyn McCallum of Miramichi Salmon Association working to remove fish in area to be dosed with rotenone to remove invasive smallmouth bass.
Then they did it again. And again. And again. When they were done there, they moved to another spot along the river and repeated the whole process.

They were, to a person, in good humour; the sun beating warm on their shoulders, and the river water cool around their feet.

“We won’t get all the fish, but we’ll do our darndest to get as many as we can,” said Nathan Wilber, of the Atlantic Salmon Federation. Several moments later, he was removing salmon one-by-one from the back end of a fyke net and passing them to people who would start them on their journey.

Once their work was done, those gathered knew, the rescue mission would shift to its next stage. 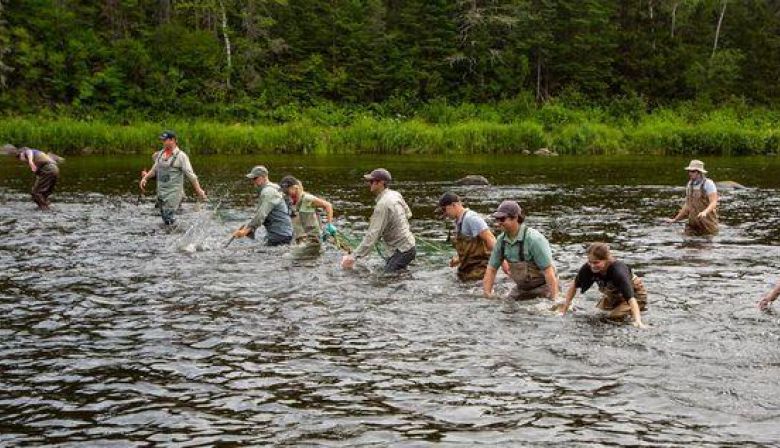 A group herding fish towards a net for removal.
That comes Tuesday, when a poison will be poured into this portion of the river, and almost everything left in the water with gills will die.

Web editor's note: protests temporarily delayed the use of rotenone.

The poison — rotenone, it’s called — is a temporary one.

Rotenone is a natural toxin derived from the root of bean plants in South America and the Pacific regions, used for centuries by Indigenous populations to catch fish. While it’s highly toxic to fish, it has low toxicity to birds and mammals.

It deteriorates rapidly with exposure to light, heat and oxygen, and biologists have picked this time of year — with warm water temperatures and low water levels and favourable life-cycle stages — with that in mind.

By the time water flows the 10 kilometres downstream to where the salmon have been released — below a recently erected barrier preventing them from swimming back upstream — the toxin will be impotent, helped along that path by a release of potassium permanganate into the river along the way.

The fish that wasn’t supposed to be there in 2008 was a smallmouth bass, an invasive species. Though they’re not native to the Maritime provinces, they can now be found in more than 100 lakes and rivers in New Brunswick. 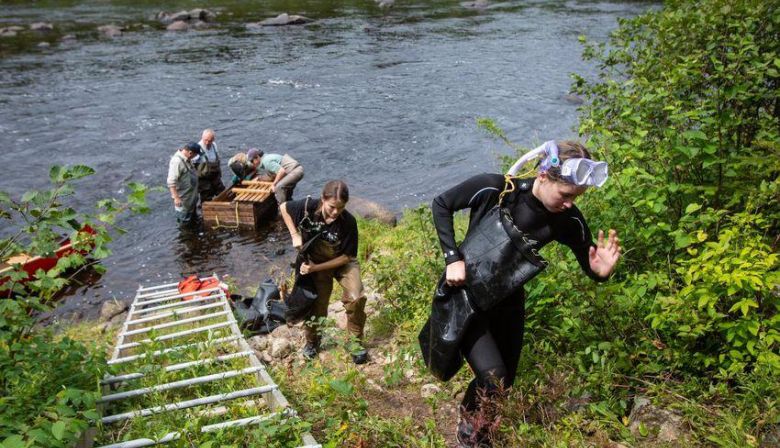 Ellie Smallwood and Heather Perry carry Atlantic salmon in order to restock them outside the poisoning area.
“None of the consequences of smallmouth bass introductions will be positive for Atlantic salmon,” reads a 2009 Fisheries and Oceans report on the appearance of the invasive species in the Miramichi.

Conservationists suspect that an initial few fish were released into Miramichi Lake at some point prior to 2008 for sport fishing; their numbers have increased drastically since then.

And that’s a problem because the smallmouth bass, like many invasive species, has the potential to disrupt an entire ecosystem. They can out-compete other fish and can become dominant. They will prey on other fish, including young salmon.

“It’s a very voracious species,” says Devin Ward, a senior biologist for Anqotum Resource Management and a member of the Natoaganeg First Nation, which makes its home along the Miramichi.

“It defends its territory very well. And like all other bass species, they tend to eat everything in the area.” 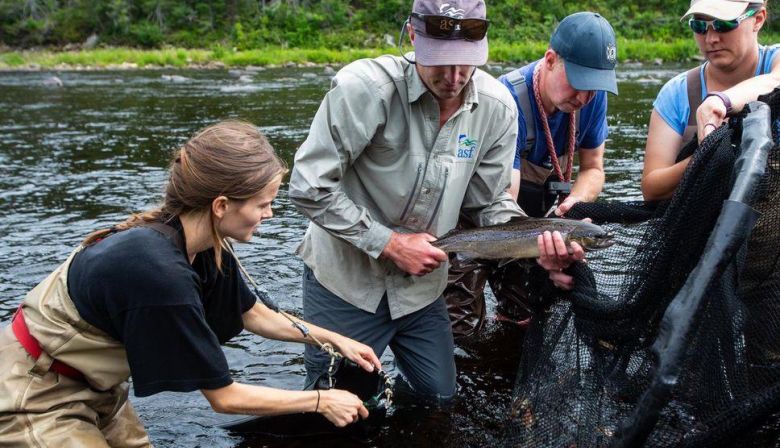 Heather Perry and Nathan Wilbur working remove salmon from the area of chemical application.
That’s problematic because what’s in the area is the Atlantic salmon — the pearls of the Miramichi watershed. The New Brunswick river has one of the largest salmon runs on the planet and attracts visitors and fishers from across the world.

But those salmon numbers have been dwindling. In 2020, according to the Miramichi Salmon Association, there were 15,000 small and large Atlantic salmon in the Miramichi River. That’s a worrisome drop from the 75,000 recorded there in 2011, and one that has a significant economic impact on the region.

“If a species like this was to get established in these headwater areas, that’s a new pressure that’s introduced … adding to the million other pressures that salmon are facing,” says Ward. “We fear that this might be the nail in the coffin for the species in the area.”

There’s an economic impact as well. A 2011 Atlantic Salmon Federation report — the most recent comprehensive study of the economic value of the Atlantic salmon — sets that value at $17 million. The salmon also creating 637 jobs, worth another $19.1 million.

In the 13 years since it was spotted in the Miramichi Lake, conservationists’ greatest fears have been realized — the smallmouth has migrated from the lake to the Miramichi River. In the lake, there were few if any salmon, but once the smallmouth invaded the headwaters of the Miramichi, where, to date, there have been no freshwater predators of salmon, the situation became much more dire. 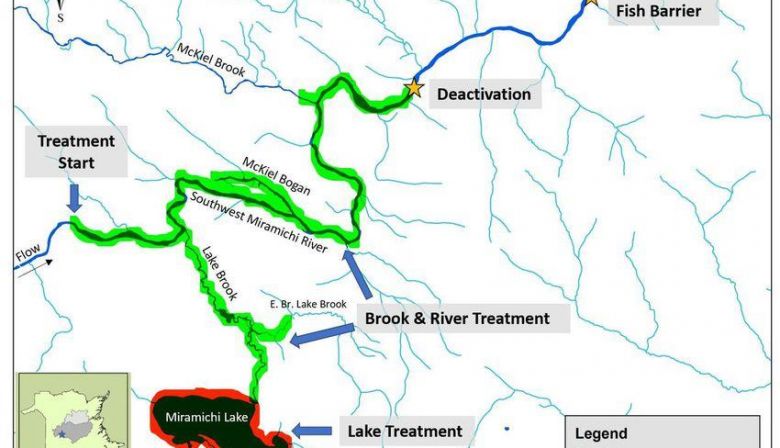 Map of areas where the smallmouth bass will be eradicated. Hopefully it will end the very real risk to other freshwater species.
This is why groups of salmon stakeholders with the catchy moniker “Working Group on Smallmouth Bass Eradication in Miramichi Lake” — which includes the North Shore Micmac District Council, the Atlantic Salmon Federation and the Miramichi Salmon Association — began developing an eradication plan for the smallmouth bass menace.

By 2018, despite having pulled some 6,000 bass out of Miramichi Lake, Fisheries and Oceans (DFO) was no closer to controlling the smallmouth population than before. And the feds were adamant about not using toxins to the eradicate the fish. At the time, they seemed more inclined to merely wait and monitor the situation.

In August that year, after having presented DFO with a plan to use rotenone in the lake, the Working Group hosted a followup meeting with federal officials in Moncton.

Neville Crabbe of the Atlantic Salmon Federation remembers well the moment in that meeting when Jim Ward, the general manager of the North Shore Micmac District Council stood up.

“And then all of a sudden you have a really well-organized Indigenous proponent backed up by a fairly muscular and determined coalition of NGOs that just said, ‘We’ll do it,’” remembers Crabbe. 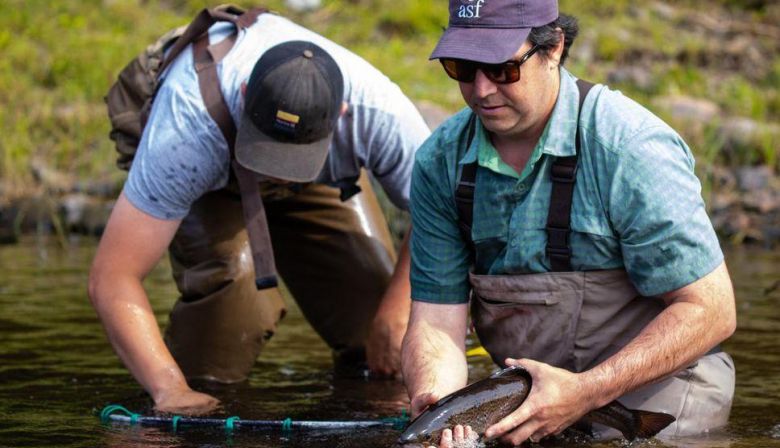 Caleb Koch of Miramichi Salmon Association and Neville Crabbe of the Atlantic Salmon Federation working together.
In May of this year, the Working Group finally got provincial and federal permissions sorted and began to put its massively ambitious, logistically complex plan into action.

It’s a task accomplished by rote in many other places in the country: in New Brunswick, Nova Scotia, Alberta, British Columbia and across the planet, most notably in Norway, where the government there adopted a 10-year plan to eradicate a parasite infecting wild salmon in the country’s rivers. The parasite was deemed capable of completely wiping out a river’s salmon population over the course of four to six years.

Beginning around 2013, after establishing gene banks for their salmon, the Norwegians dosed entire river systems with rotenone, killing all the wild salmon therein.

To date, of the 50 rivers infected, 32 have been declared parasite-free and have had salmon reintroduced. A further 11 have been treated with rotenone and are awaiting a potential all-clear.

There have been many weeks leading up to it, and many people involved in various facets of the eradication plan, but on treatment day, the Working Group will launch its operation in earnest.

There will be more than 100 people in 46 crews, all dressed in personal protective equipment monitoring on and along the lake and the river. 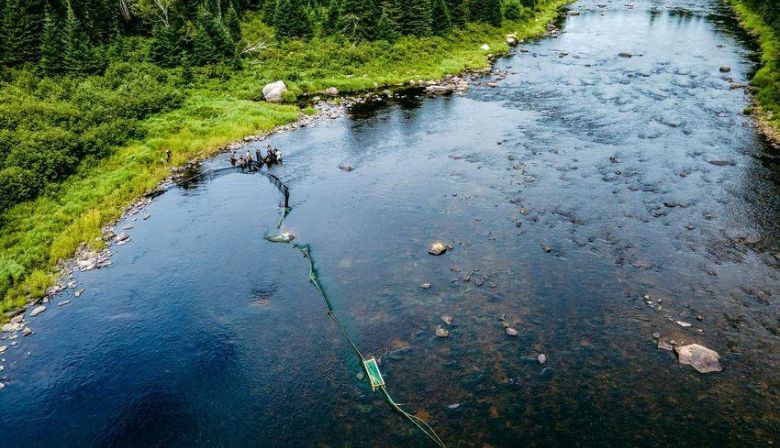 Drone's view of the nets to remove fish from the area to be dosed with rotenone. Tom Cheney/ASF
On Miramichi Lake, boats will traverse the lake, mixing rotenone with lake water and redistributing it. On the river, drip stations over the water will be set up to feed rotenone into the water flow.

After about 15 minutes, the first of the fish affected by the toxin will float to the surface. More will drop to the lake and river beds. Those that float will be gathered eventually up by crews and buried in pits dug for the purpose.

That’s merely for the benefit of homeowners around the lake, however. The scavengers that would gather to feed on the dead fish — eagles, ospreys, kingfishers and bears — would not be harmed by eating them. Although rotenone shows low toxicity for mammals, experts advise against eating the killed fish.

Over the next several days, the water will be monitored closely, assuring that the rotenone is breaking down as anticipated.

Back on the Miramichi, several kilometres downstream from where they were netted, Neville Crabbe and Caleb Koch cradle sleek, speckled salmon in the river’s flow, helping them recover from the stress of being transferred from their earlier home.

The water is ideal for them here; shallow on the bank where they are released, deeper and colder on the far side of the small, fast-moving current that divides the river. Koch and Crabbe move the fish gently in the water, helping them find their fins again.

Upstream, about 100 metres, is the recently erected barricade that prevents them from returning to their soon-to-be inhospitable home.

At some point in the near future, it will be determined that their former haunts are safe for them; crews will come and remove that barricade and they will be able to return to their old stomping … swimming … grounds.

But for now, unaware of the massive, multi-year, multi-organizational effort to keep them safe, they rest temporarily, seemingly content to relax for a moment in trusted, helping hands.

And then, suddenly, a flick of a tail, a flash of silver, a splash of water. And they’re gone.

Leaving only smiles in their wake.