Why rotenone? Because left too long, an invasive species is with us forever 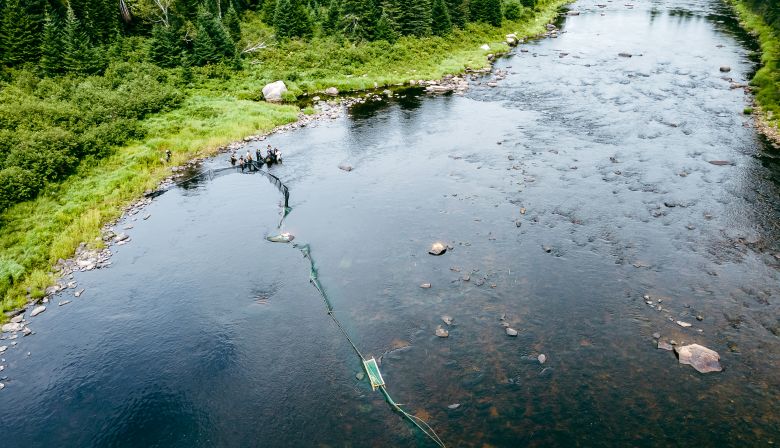 On Aug. 9, members of the Working Group on Smallmouth Bass Eradication in the Miramichi conduct a fish rescue at Tent Pool on the Southwest Miramichi River. Over three days, nearly 90 adult salmon were collected from the project area and moved behind fish migration barrier several kilometres downstream, one of the major mitigations built into the project to stop invasive smallmouth bass from colonizing the Miramichi watershed. Photo: Tom Cheney/ASF
The project to eradicate invasive smallmouth bass from the Miramichi watershed by treating Miramichi Lake, Lake Brook, and 13.6 kilometres of the Southwest Miramichi River with a federally approved rotenone formula is already underway. After five years of planning, more than two years of regulatory review, and conclusion of the Crown-led Indigenous consultation process, our Working Group members had everything ready to go on Tuesday, Aug. 17.

In the preceding weeks we finished a mussel survey and gathered extensive baseline data. We rescued 86 adult Atlantic salmon and relocated them far downstream, behind an 80-metre fish migration barrier built across the Southwest Miramichi. We slung more than 8,000 kilograms of material and supplies by helicopter into a remote deactivation site.

Two days out, we welcomed 120 project personnel to the Juniper Community Centre for a safety briefing, operational overview, and a ceremony led by Mi’kmaq Elder George Paul. Our dry run, on Monday the 16th, was the second last step in a 13-year odyssey to protect the ecosystem of the world’s most productive Atlantic salmon watershed from a notorious invasive fish.

Then, a small group of people who said they were unfamiliar with the project paddled onto the lake. Hours turned into days, trying to find a solution. The people in boats were perhaps unaware that our goals are the same: to conserve the Miramichi for the benefit of future generations. Nonetheless, we were between a rock and a hard place.

Since their 2008 discovery in Miramichi Lake, the threat of invasive smallmouth bass escaping and colonizing the 13,500 square kilometre watershed has haunted people who love and rely on this river system. A biological pollutant is forever, and a place that is part of the fabric of many nations would be permanently and negatively altered. In 2019, it was found that smallmouth had spread from the lake to a small part of the Southwest Miramichi River, placing even more urgency on eradication.

The Government of Canada recognizes the threat of invasive species and calls action to prevent, eradicate, and manage them “essential.” In 2015 Canada’s Aquatic Invasive Species Regulations came into force and a new national program was created. Yet despite government mandates, resources, and examples of successful reclamation projects around the world, the problem of smallmouth bass in the Miramichi was left to our collection of Indigenous organizations and NGOs.

In 2019, under the leadership of the North Shore Micmac District Council, our Working Group made an official application to use a Health Canada-approved rotenone product to eradicate invasive smallmouth bass from the Miramichi watershed.

Two years later, after the involvement of at least 10 provincial and federal departments and extensive public engagement, we hold 16 permits and approvals, including a positive letter of determination following a provincial Environmental Impact Assessment and an authorization from Fisheries and Oceans Canada.

Of course, the completion of the Crown-led Indigenous consultation process was a condition of these approvals. The Working Group put forth a significant and genuine effort, which included holding community meetings, answering questions, and making presentations. This process wrapped in early 2021 after DFO received letters of support from Wolastoqey and Mi’kmaq consultation bodies. Yet the process did not reach everyone.

When people from some Wolastoqey communities paddled onto the lake with the best interest of the ecosystem in mind, we hit pause to share information and answer questions about this conservation project, knowing that each day risks smallmouth bass spreading further. We sent 120 project personnel home and are still packing gear out of the field.

Since then, a statement from the Mi’kmaq Chiefs of New Brunswick reaffirmed broad Indigenous support for the project. All the partners of our Working Group remain determined to complete this critical and historic eradication effort.

The use of rotenone is the only option to reclaim the integrity of the Miramichi ecosystem. Alternatives like physical containment and removal of smallmouth have been tried since 2009 and failed. Ours is a conservation project that will result in a short-term impact to a small area of the watershed for the long-term good of the entire system. It’s not acceptable to explain to future generations that we gave it our best, but once again let the introduction of an invasive species dictate our environmental future.