Jun 11, 2018
Returns decline in Miramichi River system but increase on Restigouche
A new report from a group advocating the protection and conservation of wild Atlantic salmon says the number of salmon in North American rivers has dropped for the second year in a row.

The Atlantic Salmon Federation's annual "State of the Populations" report says numbers in 2017 dipped overall by 15 per cent compared to the year before, and only half of the 84 rivers assessed in North America met the minimum conservation limit required to safely sustain the species.

A further 22 of those rivers had fewer than half of the required number of spawning salmon.

"When you look at the numbers and you're comparing year-to-year, you're really only getting a snapshot in time of what is happening," said federation spokesman Neville Crabbe during a phone interview Sunday.

"But when you pull back the lens and look at what's happened since the 1970s, we've had multi-decadal declines in wild Atlantic salmon populations throughout North America."

The report relies on public data from Fisheries and Oceans Canada and the International Council for the Exploration of the Sea, a scientific organization contracted to provide fisheries advice to the Canadian and U.S. governments.

While numbers vary widely from region to region, Newfoundland and parts of southern Labrador experienced the biggest decline, with their number of returning wild Atlantic salmon falling 45 per cent since 2015.

Crabbe attributes the drop, in part, to low marine survival rates, explaining that salmon typically spend the first few years of their lives in their home streams before going out to sea to feed and grow.

After one winter or possibly several winters, the mature fish are supposed to return to their home streams to spawn.

The issue, Crabbe said, is that not enough of them are coming back.

"So, you have still relatively healthy numbers of juvenile salmon leaving their home rivers to begin their first ocean migration, but fewer and fewer of them are returning."

He added that open-net pen salmon farming and aquaculture can pose a risk as well: if fish manage to escape, they can mate with wild fish and may produce offspring unable to survive in the wild.

Crabbe said the drop in salmon numbers points to a larger issue.

"Wild Atlantic salmon are really an indicator species that tell us a lot about the health of our overall environment, and their decline tells us a lot about what's changing in the ocean: things like global warming, ocean acidification, changing food webs," he said.

While numbers overall are looking bleak, some areas are meeting and even exceeding the minimum conservation requirements to sustain healthy populations.

The report reveals that 32 out of 38 rivers assessed in Quebec met minimum sustainability requirements, and the English River in northern Labrador reached more than double the minimum conservation limit.

Other parts of Atlantic Canada fared relatively well — the Restigouche River in New Brunswick met 135 per cent of its minimum conservation limit. 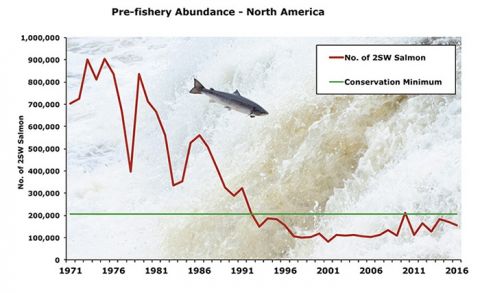 The graph shows the decline in the return of wild Atlantic salmon to rivers in North America. (Submitted/Atlantic Salmon Federation)
But returns to the Miramichi River system were down 20 per cent from 2016 for large salmon, with an estimated return of 14,600. Grilse were down 13 per cent. The report says neither branch reached the conservation limit with the Southwest Miramichi at 83 per cent and the Northwest Miramichi at 60 per cent.

The Margaree River in Cape Breton is also well above the minimum conservation limit, with an estimated return of more than 1,500 large salmon in 2017. However, the report notes that those numbers are still well below their long-term average of 2,750 fish.

Crabbe said the federation plans to ask delegates gathering in Maine this week for the summit of the North Atlantic Salmon Conservation Organization to take action in their home waters to help preserve wild salmon populations.

That could include minimizing threats from salmon aquaculture, preventing salmon fishing in areas where populations are threatened or endangered, and ensuring that all in-river fisheries are operated sustainably and responsibly.

"There should be no fishery that is imperilling that population to sustain itself and grow," said Crabbe. "We would like to see countries take a strong stand on that."

He also said the federation recently secured a 12-year conservation agreement between the North Atlantic Salmon Fund and fishermen in Greenland, which they hope will lead to Atlantic salmon numbers rising again in 2019.