Wild salmon once again swimming in potentially dangerous bloodwater in BC 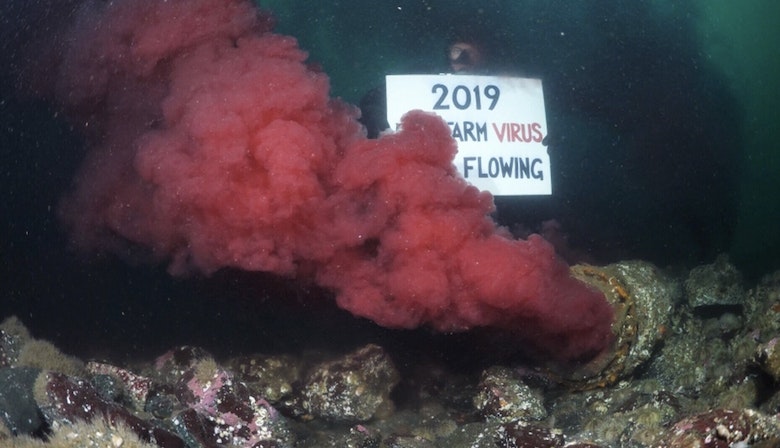 Campbell dove in Brown’s Bay, B.C., four times since Oct. 31 and recorded a video of what he saw underwater, almost two years after he first exposed bloody effluent pouring into the waters around B.C.’s Discovery Islands, where one of Canada’s largest migratory routes for wild salmon is located.

“I went back to do a dive as I was very curious to see if anything had changed,” Campbell told CTV News. “I am disappointed to say that nothing has changed. The blood is still flowing and we got it tested and unfortunately it is still infected.”

The bloody wastewater comes from a pipe connected to Brown’s Bay Packing. The company, which is located near Campbell River, B.C., has been processing farmed Atlantic salmon since 1989.

“When I dive I have an underwater camera with two big lights and the minute I turn them on, it illuminates this brilliant red colour,” Campbell said. “It is blood, water, scales and mucus just pouring out.”

It’s not the first time Campbell has witnessed this spectacle through his underwater lens. The 30-year-old photographer first discovered the pipe in the fall of 2017.

In addition to filming it, he also collected samples to be tested for any viruses and bacteria.

Campbell repeated that process during his recent dives.

“Two years ago the bloodwater was indeed infected with a virus known as PRV, so this time I was hoping it wouldn’t be infected, my fingers were crossed,” he said.

The samples were sent to Prince Edward Island where they were tested by scientists at the Atlantic Veterinary College. They were also analyzed by independent biologist and marine activist Alexandra Morton.

“Once again we found high levels of this very infectious virus, which most researchers believe comes from the Atlantic Ocean and is commonly found in farmed Atlantic salmon,” said Morton

Piscine orthoreovirus, or PRV, is highly contagious in fish. While some researchers say it poses little risk to wild salmon stocks, others have linked it to heart and skeletal muscle inflammation, a potentially fatal condition that causes heart lesions and organ hemorrhaging.

Scientists at the Department of Fisheries and Oceans are currently conducting several projects to determine PRV’s connection to fish disease and its impact on fish. The findings will be reported when available, the department says.

The problem isn’t just a Canadian one, either. Scientists from around the globe have dedicated time and resources to studying the virus’ potential effect on salmon populations.

In Canada, one team of scientists found that PRV potentially leads to jaundice anemia, which can cause red blood cells to burst and produce a yellow discolouration in salmon.

Though the science on the virus is still being debated, Morton says any potential disease risk to wild salmon must be taken seriously.

“I understand there’s a debate as to whether or not it is a problem for Pacific wild salmon, but there is a lot of evidence that it is,” she said. “So to respond with any level of precaution to protect these wild salmon, you would turn off the effluent to this pipe.”

B.C.'s wild salmon numbers have sharply declined all along the West Coast. Prior to this year’s Fraser River sockeye run, Fisheries and Oceans Canada forecasted that 4,795,000 fish would return to spawn. But that was adjusted and dropped to slightly more than 600,000 in August.

Brown’s Bay Packing managing partner David Stover told CTV News that he hadn’t yet seen the video, but said his company is in the final stages of commissioning a $1.5-million water treatment system modelled after provincial and municipal drinking water facilities.

The system is fully functioning right now, with only some automation and building construction yet to be completed. Stover said the system doesn’t test the effluent for PRV, but instead tests for bacteria, temperature, oxygen and suspended solids.

“The disinfection component of the system which is the final stage of the process is designed to disinfect the effluent,” he said. “Although we don’t test for PRV, we are confident the disinfection process kills bacteria and virus.”

Stover said his company is open to hearing any concerns about their effluent.

Stover added that the original video from 2017 brought some real positive change, including their improved water treatment facilities and government grants to develop world-class technology.

Following the release of Campbell's 2017 video, there was swift action from the federal government, even though the fish plant effluent fell under provincial jurisdiction. Dominic LeBlanc, the federal fisheries minister at the time, was so alarmed by the footage that he opted to launch a review.

Morton says Fisheries and Oceans “must do more” to protect wild salmon, including making testing for PRV mandatory for all aquaculture companies operating on B.C.’s coast. The federal department currently allows fish farms to transfer salmon from land-based hatcheries to ocean pens without testing for the virus.

The B.C. government also responded with its own investigation and a large-scale audit of fish processing plants to make sure they were meeting all regulatory requirements. The province also conducted its own tests of the Brown’s Bay effluent, confirming in February 2018, that it tested positive for PRV.

The provincial government has not responded to a CTV News request for comment.

The federal Department of Fisheries and Oceans said in a statement to CTV News that effluent discharge authorizations ultimately fall under provincial jurisdiction, but it supports research and projects designed to help the waterways in British Columbia.

“We are committed to further enhancing the sustainability of our oceans and coastal communities and to addressing issues of concern,” the department wrote in the statement.

“That is why, over the longer term, DFO will work with key federal departments and provincial governments to continue explore potential technology approaches, including closed containment, for supporting the development of the aquaculture industry.”

Tavish Campbell said he hopes his latest video will push all levels of government and the aquaculture industry to take PRV more seriously. Like Morton, he wants the dumping of fish farm effluent into the ocean to end.

Campbell would also like to see the Liberal government uphold a recent promise to transition open-pen salmon farms to closed-containment ones by 2025.

“Ottawa has to start taking the health of wild salmon seriously,” he said. “I care about wild salmon and without them, we do not have a healthy coast or a beautiful B.C.”