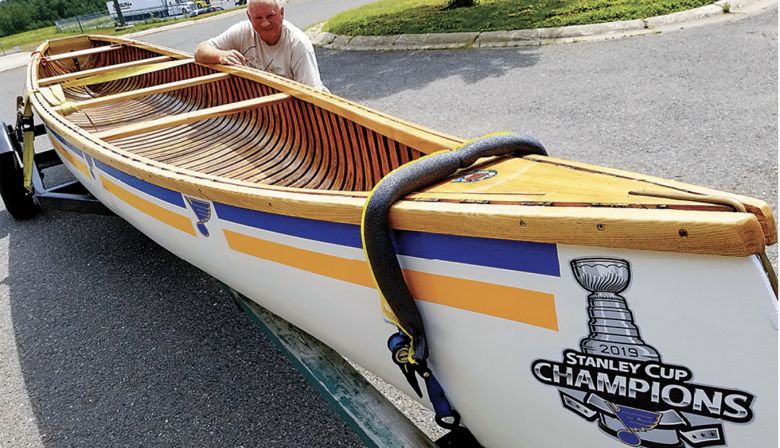 Miramichi Canoes owner Norm Betts completely rsefurbished a 20-foot Chestnut Ogilvy canoe to give Stanley Cup champion Jake Allen of the St. Louis Blues as a gift from the Miramichi. Photo Bruce Hallihan/The Daily Gleaner
When Jake Allen first caught a glimpse of a custom-made canoe built for him, it blew him out of the water.

"Wow! I'm amazed, flabbergasted:' said Allen when he saw pictures of the handiwork of Norm Betts, the owner of Miramichi Canoes in Doaktown, who completely refurbished a 20-foot Chestnut Ogilvy canoe for the St. Louis Blues goaltender.

Allen, an avid salmon fisherman, will get to see his gift up close Thursday afternoon. Betts plans to have some kids carry the canoe to Allen at Officers Square in Fredericton, where he'll be posing for photos with the Stanley Cup between noon and 2p.m.

Allen, who fishes the Southwest Miramichi and bought a camp in McNamee five years ago, said he loves spending time on the water with his father, Kurt Allen, and his grandfather, Murph Allen, who had a camp near the Cains River.

"In my early 20s,I found an enjoyment and a passion for it," said Jake Allen, who turns 29 on Aug. 7."I love being outside and in the woods or on the water. Atlantic salmon aren't easy to catch, especially in this day and age, so once you hook your first one, you're addicted."

He also enjoys spending time there -a peaceful respite -with wife Shannon and their two young daughters.

"The camp gives me a place to escape from the craziness," he said. "I got married there last summer, so it's a special, special spot for myself and my family."

Chestnut Canoes operated for decades in Fredericton, Betts said. "Their canoe designs were world famous and used extensively on the

St. John, Miramichi and other rivers throughout New Brunswick and Canada until they closed in the 1970s."

Betts restored the canoe with the assistance of some local craftsmen, who donated their labour. Fredericton businessman Andrew Dawson, who grew up in Renous, contributed the cost of materials.

Betts personalized the canoe with the 2019 Stanley Cup champion logo, with Blues, colours and crest, and Allen’s name prominently displayed.

"I've seen some of Norm's work before, and he's at the top of the field at what he does,” Allen said. "For him to go out of his way to create that for me, and spend his time and effort, is incredible. It's one of a kind.

"I'm fortunate, in my line of work, that I get some perks at certain times, but this gift is definitely at the top of the list”.

The canoe is so nice, in fact, that Allen is reluctant to christen it.

"It's almost scary:' he chuckled. "You don't want to put that canoe in the water and ding it off a rock or have it turn upside down”.

Betts decided to tackle the project shortly after the Blues hoisted their first Stanley Cup.

"Jake Allen's been a big supporter of the Miramichi;' Betts said. "I bump into him a bit, and he's always very humble, very modest Not only does he fish there, but he's signed autographs for kids in Doaktown and encouraged people to vote for Kraft Hockeyville.

"So this canoe is a gift from the Miramichi kids who Jake inspires. He's a great role model?'

"That area does a lot for me, so I try to do a lot for them;, Allen said. "It's almost come full circle. It's pretty cool that Norm's done it for that reason?'

"Jake is like New Brunswick's prodigal son when it comes to hockey, but he's a bit of an icon on the Miramichi as well because of his relationship with some of the major sports fishing guides throughout the Miramichi River system," Stewart said "He's also been quite an inspiration to the youth of the region, obviously being an NHLer but by the way he treats people.

"Not many people from New Brunswick make the NHL. Here's a guy who did but has not forgotten where he's from”, Stewart said. "That's a big deal to a lot of people."