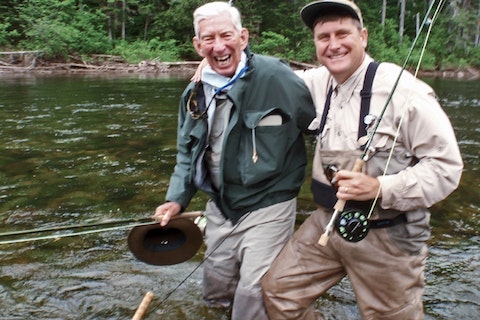 In his 2017 book, Travels on the Green Highway—An Environmentalist’s Journey, Nathaniel Reed quoted his mother as proclaiming that he came into the world “casting a fishing rod.”

He exited the same way.

Nathaniel Pryor Reed died July 11, 2018. He had just landed and released a bright, 16-lb Atlantic salmon from his beloved Grand Cascapedia River in Quebec, when he fell and struck his head on a rock. He never regained consciousness.

Shortly before that trip he had said to a friend, “If I die,I hope it’s there.” Reed—a lifelong Republican who proudly upheld the once traditional values of his party (such as conserving)—was arguably the most eloquent and effective American advocate for fish, wildlife and nature of the 20th and 21st centuries.

When the odds seemed hopelessly stacked against him he stood tall, literally and figuratively. And more often than not, he won. He worked for six Florida governors and two U.S. presidents, leading the charge on most every major environmental battle that came up.

He founded 1000 Friends of Florida (and served both as president and board chair). He also served on the boards of the Everglades Foundation (which he helped found), The Nature Conservancy, the Atlantic Salmon Federation, the Natural Resources Defense Council, the National Audubon Society, Yellowstone National Park, the National Geographic Society and the South Florida Water Management District.

“Nat dedicated his life to caring for the future of our environment,” said John Dillon, ASF Chairman (U.S.). “He always made the time to be a valuable contributing member of our board. We will miss his guidance and wisdom.” “Nat was a giant in conservation, and not just Atlantic salmon conservation, he was a leader in the preservation
of our natural world,” noted Bill Taylor, ASF President. “He was a deep thinker, strategist and fighter. He left a lasting legacy at the Atlantic Salmon Federation and his fingerprints are all over many of our most important salmon conservation victories.”

Polluters and developers weren’t wrong when they called Reed a “zealot.” But what made Reed unique among zealots were his world-class people skills. He was adept at building alliances even with former adversaries. He understood when to take charge and when to delegate, when to speak and when to listen, when to demand action and when to be patient. He wrote long, eloquent letters and emails to most everyone he worked with or even against.

On his return to Florida from military service in 1960, Reed was appalled and outraged at the environmental destruction that confronted him. He promptly joined The Nature Conservancy, which had protected the Mianus River Gorge near the Reed family home in Greenwich, Connecticut. In due course he would become vice chair of the Conservancy’s board and one of its most generous supporters. He also joined every “Friends” group of every river, beach, lake and unique landscape.

In 1965, he met Florida gubernatorial candidate Claude Kirk Jr., a powerful ally who would provide him the political muscle to stop, or at least slow, much of the destruction of Florida’s fish and wildlife habitat.

For Kirk’s stance against what was widely viewed as “progress,” the candidate was dismissed by pundits as a “fool” and maverick.

But, as Kirk’s most energetic and effective campaigner, Reed propelled him to a decisive win. In return, Kirk hired him as his environmental advisor at the same yearly salary Reed would demand from all employers for the rest of his life—$1 (because, as he accurately noted, no one he knew was less in need of money).

Among Reed’s more impressive Florida victories was stopping the U.S. Army Corps of Engineers from completing its 182-mile-long Cross-Florida Barge Canal, one of the most destructive boondoggles ever perpetrated on U.S. taxpayers. The project would have destroyed the entire length of the fish-and-wildlife-rich Ocklawaha River that collects water from a 2,800-square-mile sanctuary for vanishing plants and animals, many found nowhere else.

There would have been vast impoundments connected by excavated channels and accessed by five locks. The giant gutter would have run from Jacksonville south and upstream on the St. Johns River (to be dredged), overland to the Ocklawaha (to be dredged and impounded), to a point near Silver Springs (thereby destroying most of the Silver River), then overland again to the Withlacoochee River (to be channelized, dredged, and impounded), and on to Yankeetown and the Gulf of Mexico.

Kirk had endorsed the project until Reed sternly set him straight.

“What’s this canal that people are complaining about,” President Nixon inquired of Kirk in October 1970. “Are you building it?”

Reed and his allies (including the National Audubon Society, which ran a piece in its magazine exposing the environmental costs of the Cross-Florida Barge Canal) ultimately convinced Nixon to kill the project, nearly a third of which had been completed. Some of the destruction persists in the festering, weed-choked deadwater impounded by Rodman Dam, the only dam in the nation without even an alleged function. But there is mounting pressure to remove it.

Reed played the key role in preventing the Dade County Port Authority from constructing a jetport with six-mile-long runways on 39-square miles of Everglades it had acquired just north of the National Park. The plan also included a 1,000-foot-wide transportation corridor from coast to coast, a high-speed mass-transit system, and a “recreational waterway” for airboats.

Reed was instrumental in the creation of Big Cypress National Reserve, east of Naples. Had it not been for Reed and the allies he stood with and inspired, Biscayne Bay would now look like Pompano Beach or worse. Instead it’s a protected national park, teeming with aquatic and terrestrial life, including one of the world’s largest coral reefs and the East Coast’s longest stretch
of intact mangrove forest.

Nixon liked Reed’s style and, especially, his stellar reputation in the Democrat-riddled environmental community. So he hired him as his Assistant Secretary for Fish, Wildlife and National Parks.

“I don’t give a damn about the environment,” Reed quoted Nixon as telling him. “I have other priorities. I want a brilliant record, better than Kennedy’s and I don’t want to be bothered by you or anybody else.”

“What’s this stuff I’ve been hearing about called DDT, and what should we do about it?” Nixon continued. “Mr. President,” Reed replied, “It’s a nasty biocide that’s killing our wildlife and maybe us. We need to ban it; and if you disagree, I’m not interested in the job.” Nixon told him to make it happen, and he did.

Nearly as insidious as DDT was a biocide called Compound 1080, used by ranchers to kill coyotes, bobcats and cougars, but which also killed bald eagles, golden eagles, foxes, badgers, pet dogs and every feathered and furred creature that scavenged poisoned predators or even the poisoned scavengers.

It had been Compound 1080 that extirpated wolverines from the contiguous states. Reed got it banned; and wolverines began their recovery, ongoing to this day. 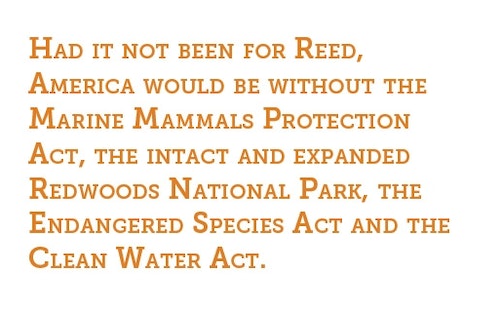 Had it not been for Reed, America would be without the Marine Mammals Protection Act, the intact and expanded Redwoods National Park, the Endangered Species Act and the Clean Water Act.

In 1972, when word came down that powerful polluters had prevailed on Nixon to veto the Clean Water Act, Reed announced his resignation. But the president’s Chief Domestic Advisor, John Ehrlichman, told him that Congress would probably override the veto. Congress did; and Reed stayed on, continuing his environmental leadership under Presidents Nixon and Ford.

At America’s first and best-loved national park, Yellowstone, Reed was dismayed to see grizzly bears feasting on garbage. The park had even erected grandstands at dumps for the public to view these obese, semi-domesticated caricatures of a magnificent, wild species.

Biologists who had been studying Yellowstone grizzlies opposed Reed’s and park officials’ plan to wean the bears off garbage. Without garbage, they proclaimed, the bears would starve and, as they starved, they’d attack visitors. Reed and the park presented scientific evidence to the contrary, and eventually the park closed the dumps and placed bear-proof lids on garbage cans. There was no evidence of increased bear mortality or attacks. If any garbage-dependent bears quietly succumbed, they were swiftly replaced by wild bears from Yellowstone and the five surrounding national forests —prime grizzly habitat that totaled about 12 million acres.

What’s more, the park had documented loss of numerous bear cubs to male grizzlies when mothers were distracted by the dump smorgasbords.

Today Yellowstone is without garbage-eating circus bears. All grizzlies now function in a complex and complete ecosystem. And their recovery has been one of the great success stories of the Endangered Species Act.

After Reed’s federal service he returned to Florida, continuing his effective environmental activism, fighting tirelessly for fish, wildlife, the Everglades, clean air and clean water. Despite mounting health issues, he never slacked off.

In his preface to Travels on the Green Highway—An Environmentalist’s Journey, Reed announced that he was “closing out” his life. His friends, allies and acolytes didn’t believe it. But he knew more than they did.

Red died 11 days short of his 85th birthday. He leaves his wife of 54 years, Alita, two sons, Adrian and Nathaniel Jr., a daughter, Lia, and five grandchildren. His legacy lives on with his family and in the beautiful wild creatures and places that will brighten this planet and the lives of Americans and visitors to America living and yet unborn.