Wanted: "People with an Agreeable Personality and who are Familiar with the River." 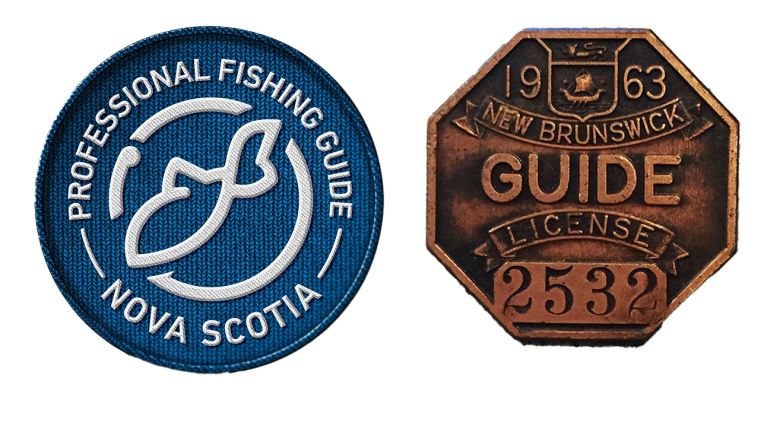 Perhaps I should have read between the lines when the answer to my first question—“How much cash should I bring to tip the guide?”—was, “It’s not that kind of trip.” That was Charles Cusson’s way of saying we would be fishing without a guide.

I like to fish with a guide. The reasons are fairly obvious: they know the local angling regulations and where the fish are most likely to be. And although guides may not always be able to keep you perfectly dry if it rains or guarantee you a fish, they can keep you safe. They also help you improve your casting and understand a little about the fish you are chasing and the surrounding environment.

Cusson, ASF’s director of Quebec programs, had been trying to find us a guide since October of 2021. The lower Moisie, more specifically the Winthrop-Campbell beat, is a terrific section. Many years ago, I hooked my biggest salmon, a 22-pounder. Would I be so lucky without a guide?

Guiding anglers to salmon is a particular profession. Even those who guide year after year consider it a part-time gig or even a hobby. The truth of the matter is, it’s more than a full-time job. It’s a lifestyle that requires skills that must be learned “on the job” and added to over the years.

Salmon fishing guides often act as Sherpas, carrying equipment and sometimes the clients themselves. In Scotland hundreds of years ago, “ghillie-weetfit” or wet-foot ghillies were employed to carry clients across rivers so they wouldn’t get wet feet. These days, modern-day versions on both sides of “the pond” can be, when required, casting instructors, chefs, medics, therapists, philosophers and always excellent storytellers. 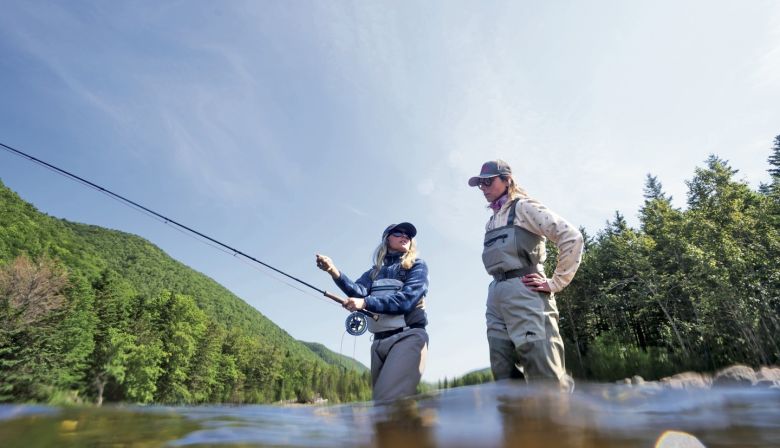 Kate Sherin guides Lila Gale on Tent Pool, Margaree River (Scotty Sherin)
As we found out on the Moisie, however, guides are getting harder to find. There is no school from which salmon guides graduate each year. Michelle Lévesque, general manager of the Matapédia and Patapédia river management corporation (CGRMP), noted that this means there is no formal recruitment process. “We’re constantly on the lookout for new guides,” she said. “What we really need is a mix, people familiar with the river and with an agreeable personality.”

That’s exactly what Jonathan (Joe) Tremblay brought when he joined the ranks of Matapédia guides in 2017. Then, at 18 years old, he was by far the youngest guide on the river. Born and raised in Causapscal, he caught his first salmon at 11 and came to know the river and acquire skills such as poling through fishing with his dad.

Finding people like Tremblay is rare. Wayne Curtis, who grew up on the Miramichi River and followed his father into guiding, notes this route is no longer one fol-lowed by many youngsters. “Now children grow up away from the river. They have no interest in it and spend too much time on the internet, or electronically communicating with other children their age.”

Now, as COVID crawls to an end, new salmon anglers are eager to get back to the great outdoors. Myriam Bergeron, director of the Fédération québécoise pour le saumon atlantique (FQSA), says that 55% of respondents to a recent survey of Quebec licence purchasers were anglers with less than five years’ experience.

Newer anglers are the most likely to want a guide. As a result, river managers like Darlene Sexton of the Cascapedia River Society found the person-power shortage frustrating. “In the spring we advertised for part-time, replacement guides,” she said. “We didn’t get one response.”

Old-school guides like Curtis aren’t that surprised by the difficulty in finding new guides. “It’s a damn hard job, the days are long. You have to be up before dawn and be on the river until 10 pm,” he says. “There is no security. If you show up and the sport decided to go home because the fishing is so poor, you’re out of luck because guides rely on tips. It’s not an easy life.”

In many cases, it is old-school guides who beget newer versions of themselves. Curtis’s son Jason has been guiding for 30 years, and Jason learned much of the trade from his dad. “It would be one of the worst jobs on the planet if you didn’t love fishing,” he says.

In New Brunswick there are two classes of guides, I and II. A Guide II licence allows you to take out one angler, typically a family member or friend from out of province, and is generally a no-fee, no-reward service. Guide I means you can take out up to three clients. Neither requires any specific training, but a test is required. Yet in many cases, guides literally hold the lives of clients in their hands. 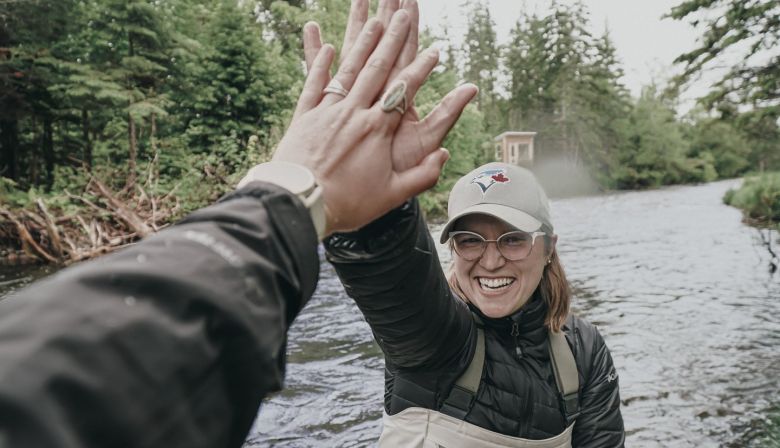 Mélanie Frigault celebrates with Guide Gioia Usher after landing her first fish on the fly on Middle River, Nova Scotia.
Curtis works at The Ledges Inn on the Miramichi. He has first aid and CPR training and is very aware of the dangers. “Out there on the river, you have to be on your toes,” he says. “Especially when there is ice coming down.”

Like Richard Adams, who cut trees in the winter months, Curtis does woodworking to augment his income in the off-season. How does it measure up against other professions? “There is some prestige,” he says. “Definitely being a good one is a badge of honour.” 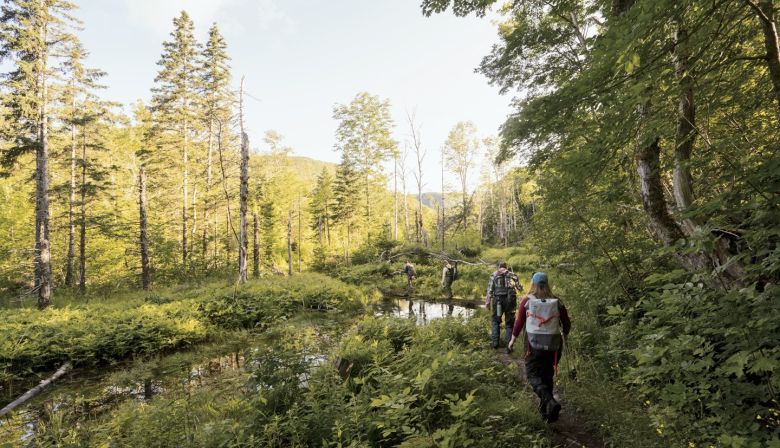 Participants at Gioia Usher’s all-women fly-fishing retreat en route to Twin Elm Pool on the Margaree River (Scotty Sherin)
On the evening of January 21, 2020, Benoit l’Espérance, a certified and experienced winter adventure guide, made the fatal decision to lead a group of eight French tourists off the marked snowmobile trails in Lac Saint-Jean. Six of the group, including the guide, died when they broke through a stretch of thin ice on the lake.

Following the tragedy, the Quebec government announced stricter regulations for tourism operators. Training for all-terrain-vehicle guides would be mandatory and would focus on wilderness travel “Snowmobile excursions, canoe trips and ocean kayaking are all ways of appreciating Quebec’s natural beauty,” Tourism Minister Caroline Proulx said at the time. “But they must be rigorously regulated to ensure the safety of everyone participating, be they from Quebec or abroad.”

The new regulations were aimed at the adventure tourism sector. As such, they don’t directly affect salmon angling guides, but that doesn’t mean fly-fishing is without its dangers. At present the Ministère des Forêts et de la faune et des parcs has a course for hunting guides, but little, if anything, for fishing.

“We have excellent guides in Quebec,” says Bergeron. “They are experienced and with good leadership qualities.” She is tapping into this resource by forming a committee to look into the issue of training and certification for salmon fishing guides. “The first meetings have been positive,” she says.

Like Quebec, New Brunswick has no mandatory government-led training for fishing guides. These provinces need only look to Nova Scotia for leadership in certification and continued education for guides.

Even before being able to take the course to become a certified guide in Nova Scotia, applicants must first obtain their wildlife resource card and undergo a background check by a conservation officer in addition to having their boater safety certificate.

The guide course is given over three days. Participants are taught safety, regulations and orienteering. Instructors may touch on a wide variety of subjects depending on the makeup of participants. A pass mark of 80% is required on the final exam. To obtain the guiding certification, applicants must have completed a valid first aid course. 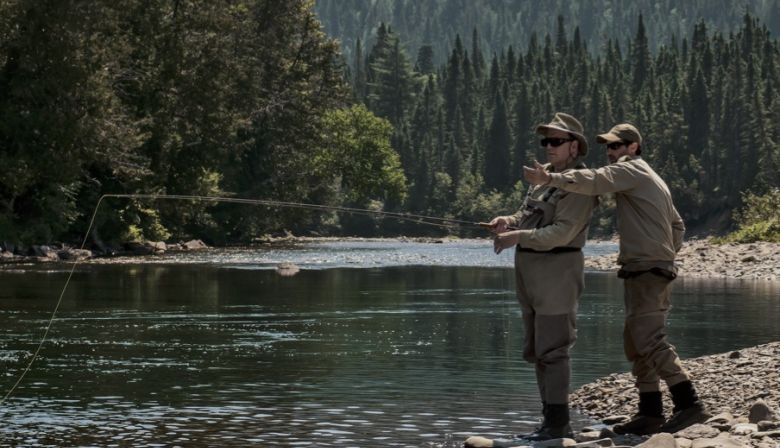 Dave Adams gives advice to an angler on Big Indian Pool, St. Jean River, Quebec (Jean-Guy Beliveau)
In contrast to other provinces where new, young guides may be few and far between, Andrew Lowles, resource manager with Nova Scotia’s Department of Fisheries and Aquaculture, says the guide courses are well attended. Lowles has hunted, fished and guided across much of Canada and says what is really special about the Nova Scotia guide certification program is the follow-up opportunities for continued education. A professionalization course offers participants instruction in photography, food handling, and social media and marketing.

“We also offer an Indigenous Learning Day to help our guides better understand fishing and hunting treaty rights, and to better understand local indigenous culture,” he says. “You can only spend so much time fishing and it helps if you can talk about the culture, history and flora and fauna of the surrounding natural environment.”

Although there is a shortage of guides in Nova Scotia—Alex Breckenridge had a tough time filling requests on the Margaree earlier this season—the courses are popular, especially among youngsters. “Lots of young folks take the guide courses because it helps them get summer jobs at fishing camps in other parts of Canada,” Lowles adds.

Why Nova Scotia is so far ahead of other provinces in guide certification is not an easy question to answer. But the province is not standing still. A new initiative, tentatively called Fish Nova Scotia, will gather information on locations, regulations, technique and guides into one beta website. 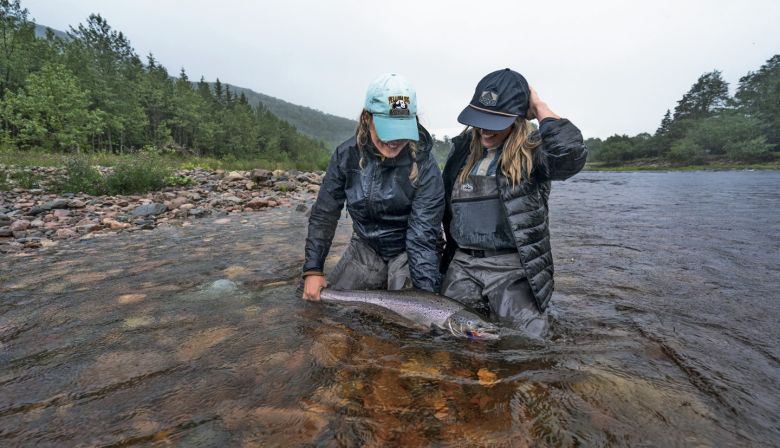 Kate Sherin and Gioia Usher release a Margaree salmon at Tent Pool (Scotty Sherin)
Our two days on the Moisie were pleasant enough. Charles steered our boat to the approximate location of the pools we had been drawn on the Winthrop-Campbell section. We kept watching other anglers to get an idea if we were positioning our canoe in the right spot. Not surprisingly, I didn’t have as much luck as I did with a guide a few years ago.

But it wasn’t the fish that were lacking. There will be other opportunities to hook a salmon. What we missed out on is the connection guides have to the long history, traditions and culture of Atlantic salmon angling, much of it unwritten but preserved in the stories and lessons that are passed down from one generation to the next.

Now there’s something that is well worth a tip.
Martin Silverstone is editor of the Journal. He fished the Moisie in early June.