Could a Snowboarding Thrill Seeker Find Happiness on an Atlantic Salmon River? 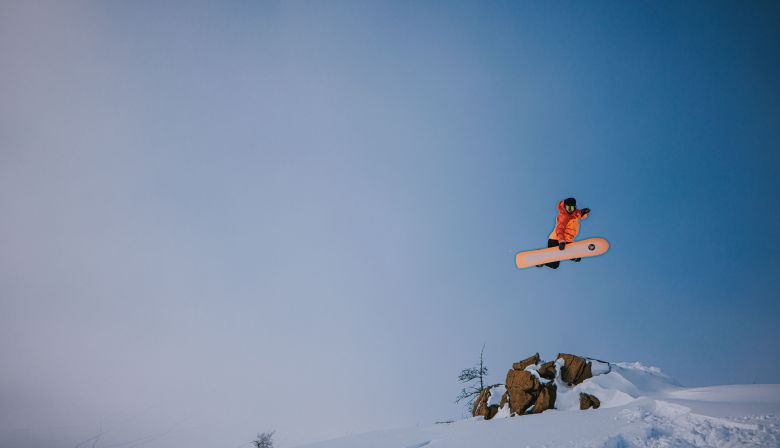 Photographer Dru Kennedy launches off a Long Range Mountain rocky outcrop.
“What the *&^% was that?” cried Dru. My good friend had just hooked, and lost, his first salmon. Disbelief, yes, but tinged with a touch of awe. For hours and hours last winter as we “skinned” to peaks in search of virgin powder snow, I described to Dru what a salmon take feels like. A silver freight train, a torpedo . . . I tried to describe a fish with a legendary pull. Despite my impassioned descriptions during our time in the Blomidon Mountains, Dru was still shocked by the strength and force. Yet, it was over in the blink of an eye. After a lesson in setting the hook and reel drag, and how to play a fish, we were back in the pool. Unfortunately for Dru, we never saw another fish that morning.

It takes a lot to put someone like Dru into a state of disbelief. Born and raised on Newfoundland’s wilder coast, the west, he can accurately be described as a professional adventurer. Yes, there is such a day job. In Dru’s case, he’s a global ambassador for Burton Snowboards and a successful freelance photographer.

I’m an east coast native of our province, a firefighter for the city of St. John’s, and a fishing guide in Labrador. From coast to coast and east to west there isn’t a place on this island where I don’t feel at home. Dru and I met somewhere in the Long Range Mountains seeking out perfect stashes of “white gold.”

It was obvious we shared the same love of adventure, yet as the mountain snows disappeared in the spring, so did our friendship melt away until the following winter. Dru, you see, was not a fly-fisher. 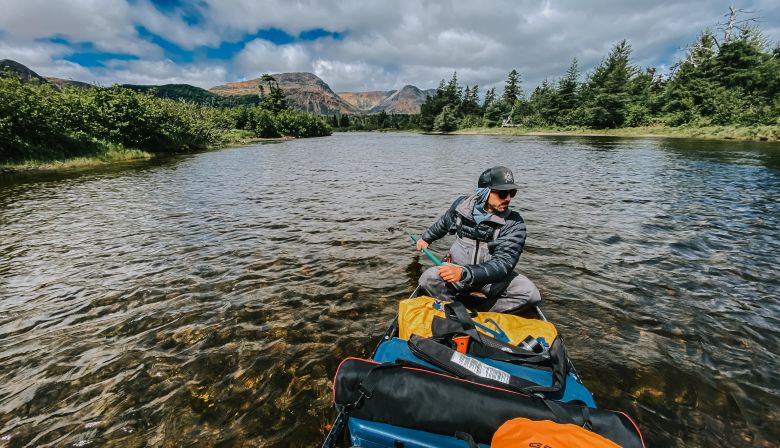 A fully loaded canoe provides all the creature comforts of home.
My own introduction to fly-fishing was unconventional. My grandfathers were trout fishermen by spincast only. They provided me with a foundation to appreciate nature and showed me the life of a true Newfoundland outdoorsperson. However, fly-fishing wasn’t instilled in me. It was something I discovered on my own.

The bridge leading into my grandparents’ town crosses over the Exploits, a river rich with salmon. You could always see fishers lined up along the riverbank partaking in that age-old salmon fishing ritual—rotation. Each casting, then moving, almost in perfect unison, one or two careful steps downstream. I was captivated by this view as a youngster and at the age of seven, with little direction or guidance, I picked up my first fly rod. Determined to hook a fish, I spent my entire childhood on the Exploits. My grandfather would sit on the riverbank and watch my awkward pursuit for hours. I never veered far off the beaten path, fishing from dawn to dark, rotating through pools, honing my craft and learning from others far more experienced. My fly-fishing progressed as I got older, and my curiosity for adventure grew. Time passed. I moved on, grew up, eventually taking a job as a firefighter. One thing remained constant, however—the fish that stole my heart, the king of fish, the Atlantic salmon. It led me to the north to Labrador, where I have been guiding for 11 years now.

Newfoundland and Labrador is one of the last frontiers where waterways are 100 per cent public domain. Every river, stream, brook, creek, lake or pond is like a giant playground with a sign pointing in that reads “OPEN to ALL.” There are no permits required, just the tools you need to target the species you desire. Don’t worry about the crowds. Newfoundland and Labrador has the lowest population density of any province in Canada, a country already among the least densely populated on the planet. Roughly 52 per cent of New foundland’s population live on a small portion of the island—the Avalon Peninsula— covering only 9,221 square kilometres. The remaining 48 per cent is spread out over the other 395,991 square kilometres. There are vast expanses of untouched wilderness, and this natural heritage is the province’s greatest asset. 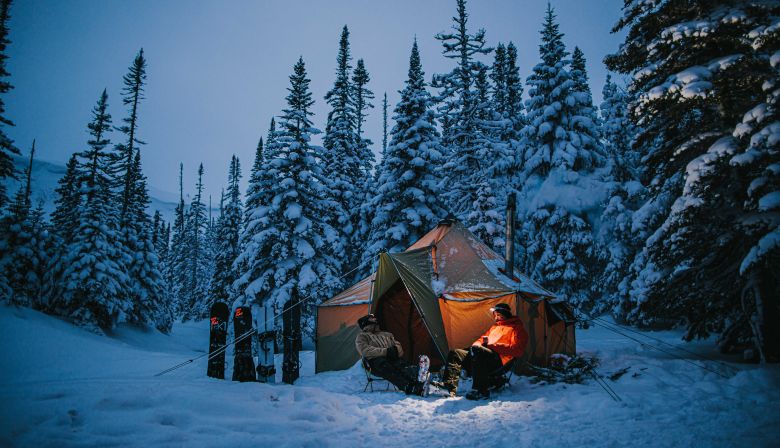 A snow-cloaked black spruce forest provides added shelter from the wind at the snowboarders’ blackfly-free winter campsite.
Like fishing, I also started snowboarding at a very young age. Skiing time was family time, and the Scotts frequented our local ski resort, Marble Mountain, on the west coast. The more I got hooked on snowboarding, the more time I spent on this side of the island. There was amazing snow in the winter, deep and dry, and high-quality salmon fishing in the summer, the kind that can only be found in Newfoundland.

Dru was a local snowboarder. Given our lifestyles and passion for adventure, it was only a matter of time before we crossed paths. Our longstanding friendship has lasted a decade and has brought us on many wild adventures.

At the end of one especially rewarding day snowboarding in the backcountry, we decided to take the scenic way home on our snowmobiles. We found ourselves on top of the Long Range Mountains taking in the “golden hour” view. The setting sun lit up the scene below, a valley separating two sub-ranges: the Lewis Hills and Blomidon Mountains. Everywhere, the land was covered in bare trees and cast in snow. My friends looked across the hills to the east, scouting future lines of untouched snow. I traced a frozen river that split the valley floor as it meandered lazily west and out to the ocean. The angler in me couldn’t help but daydream about the summer months ahead and that frozen river below. I knew there was much adventure to be found there when the salmon began their migration. It was the Serpentine River.

And so, it came to be the following summer that this dream became a reality.

It was an ideal opportunity for Dru to finally find his way to the riverbank with a fly rod. Being so familiar with the Long Range Mountains in the winter, it only seemed fitting this would be where he experienced salmon angling for the first time. Less frequented by anglers than its more famous counterparts, the Humber and Exploits rivers, access to the Serpentine can be difficult. A two-hour drive on a decommissioned logging road bounced us around badly, but eventually brought us to Serpentine Lake.

We loaded our canoe and paddled across the lake and downriver, where we had arranged to meet with friends to fish a couple of pools. Bill and his son Tyler were no strangers to this valley. Bill was a retired guide and had camped and fished here for many years. They knew this place better than most and were happy to share their knowledge, which is mainly why Dru was able to hook, and lose, a powerful salmon so quickly. 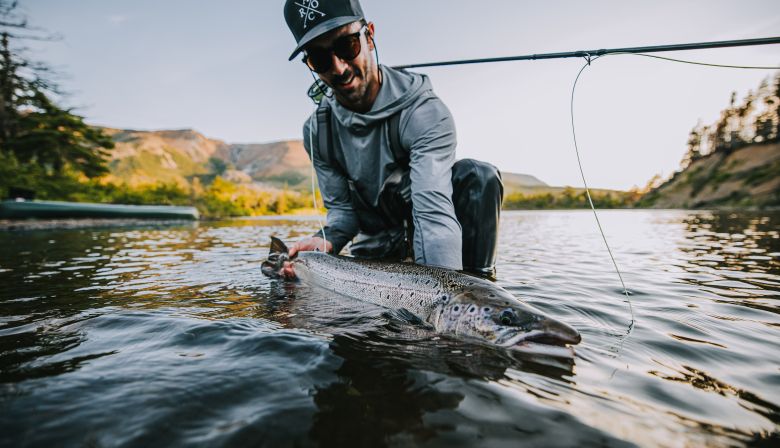 The author releases a Serpentine salmon.
Bill and Tyler were fishing on the river when we arrived. In no time, Bill had a fish on. After release, the mature hen was able to continue to upstream spawning grounds. Then, it was time to put Dru in the hot seat. Bill directed him to where he had noticed a few fish move. It wasn’t long before Dru was casting a respectable line without tangle, swinging the fly to the end of the pool. After the drama of the lost fish, we met on the riverbank for lunch. Bill lit a fire and put on the kettle. Over a cup of tea, he scratched out a map in the sand of the pools and zones we would find on our trip downstream.

It was incredible to listen to him speak, as he knew the river better than I knew the back of my hand. We made every effort to listen intently and absorb some of his knowledge.

After the “boil up” we continued paddling downstream. We tried to remember Bill’s advice but judging distances became harder, and certain rocks, marks in the banks and leaning trees he had described became more of a mirage than a reality. We were on our own. A downriver wind turned the paddle into a leisurely float. As we paddled, a quietness enveloped us, and we could hear the “chickadee-dee-dee” call of that black-capped species and the sound of rippling water against the bow of our canoe. A cow moose and her calf grazed near the shoreline. We glided by, and the pair continued their midday feed without the slightest bit of concern. We were in their world now, and even without a salmon, the trip was already worth the effort. 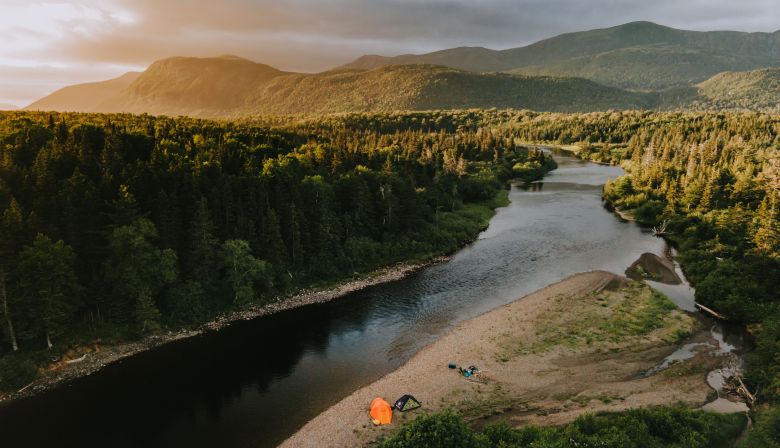 A slight breeze in a more exposed location on a gravel bar helps keep the bugs at bay. A priceless view of the Blomidon Mountains and easy access to one of the Serpentine’s salmon pools are added features.
Eventually, we scouted some excellent places to camp. We found one not far from a set of falls.  We set up camp and hiked to a few of the pools Bill had mentioned. The water was higher than normal, but the river was teeming with salmon.

Our plan was to fish our way back upriver from there. The journey would take four days. To put it in snowboarding terms, this is what’s known as “a score.”

Here’s where Dru soon found his line tight to a salmon once more. He executed a proper hook set and played the fish to perfection this time. Silver! Fresh from the sea. We finally got what we came for. As this first fish swam off, I could see Dru was developing a deep appreciation for Salmo salar.

Dru’s first salmon trip, but for me everything was familiar. I wondered, Did he share the same euphoric sense of freedom we enjoyed snowboarding in the backcountry? Sitting fireside on the last night, we talked about all the effort it took to get here and the time spent away from family. And of course the salmon wouldn’t always be so cooperative. “So was the juice really worth the squeeze?”
I asked. “Was the total river experience enough? Or was ‘the tug the drug’?” Dru smirked and answered noncommittally, “Morning coffee was the best part.”

Like any good salmon addict, the next day I woke up early to fish through the pool in front of camp. We were nestled deep in the valley, surrounded by mountains. There was not a breath of wind, and smoke curled skyward from the coals of last night’s fire. I waded a long stretch of river, step by step, cast after cast. It felt like I was being watched, and when I turned around, there was Dru onshore, sipping a coffee. He looked content, like after a long day of snowboarding. It was time to go home, but I knew the hook was set deep, and we’d be back before long. 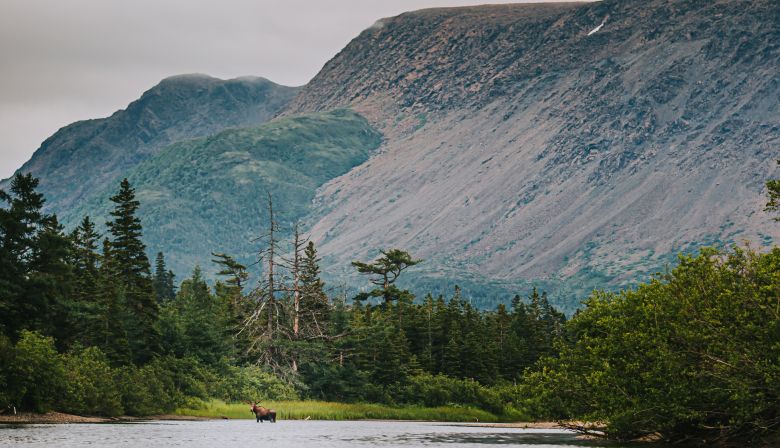 River, moose, mountain form the backdrop to the intangibles that make outdoor life worth living.
Matt Scott is a St. John’s firefighter who also guides salmon anglers in Newfoundland and Labrador during the summer months. Dru Kennedy is a freelance photographer and professional snowboarder.